JConcepts Team Drivers participate in a great charity event this past weekend. It was a fun event for a worthy cause. JConcepts was well represented, with team members Ryan Maifield, Brandon Melton, Chris Pace, Barry Pettit and Cameron Saxon present.

This past weekend the Kyle Busch foundation hosted a charity event at the Z-Max Dragway in Charlotte, N.C., featuring an RC event. The event featured the Rowdy RC All Stars, named obviously after the Rowdy Kyle Busch. Kyle is an avid RC fan and has been involved in the hobby for many years.

The event was a carnival type combination of rides, games, food, and displays of many different types. A track was built by Toby Robinson and Jason Ashton, using the dragstrip pits and hauling in dirt. NOS Energy drinks also sponsored the event and provided the drivers stand (a motor coach with an awesome upper deck), and the refreshments for the day. Team Associated provided the race vehicles for the Kid’s race and the Celebrity Race. They also provided an excellent display for future RC drivers to look and ask questions. Toby and Jason did a great job keeping the action going.

The RC event featured a “Kid’s Race”, a “Celebrity” race, and a “Professional” race. Kid’s were selected to race in qualifiers and then a main. The kids were helped by RC racers such as Richard Saxton and Ryan Maifield. The overall winner received a new Team Associated SC10. The Celebrity race had media guests and Nascar drivers battling and rubbing fenders, even more than they do on the oval tracks. Kyle Busch dominated the track but had some early challenge from Scott Speed. Juan Pablo Montoya and Joey Logano joined in the mix, with Denny Hamlin and Bobby Labonte wheeling some RC as well. Busch and Speed also tried out a little nitro action using Maifield’s and Pettit’s 1/8 scale buggies. Hamlin and Labonte couldn’t resist the nitro either and blasted around the track with dirt flying and smoke pouring.

The Professional race was not to be as the day came to a close and simply ran out of time. There were winners, however, and those winners were the RC community who came out to support the cause for the Kyle Bush Foundation. 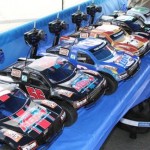 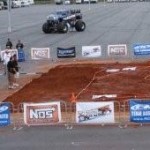 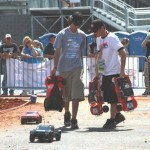 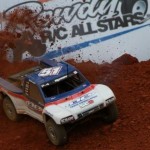 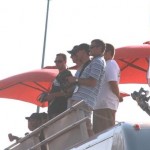 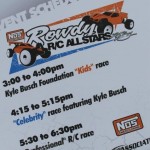 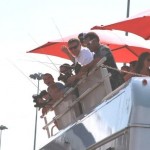 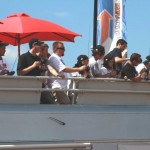 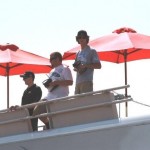 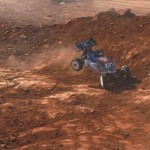 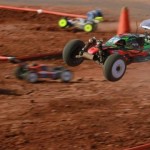 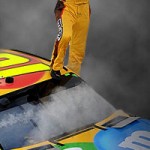