The most anticipated race of the year for Hobby Haven was ran last Wednesday night, and the racers we were blessed with great weather and race conditions. The race format was a simple one. Each team consisted of 3 drivers and they were all required to race the truck for at least 20 minutes that night. One driver would pilot the truck, a second one would marshal, and the third driver was located in pit lane. Each team had to use the same truck the entire race, make repairs to it as needed to keep it running, and you had to pull into pit lane to swap out battery packs.

After a 5 minute IFMAR qualifier to figure out the starting grid, followed by a brief intermission, the 2 hour race was on! It didn’t take long for trucks to start breaking, motors overheat, and ESCs start to fail. The field started out with 12 trucks, but due to the nature of the race, at one point only 5 were running on the track! After 2 solid hours of SCT chaos, top qualifier Team Fusion came out on top, 2009 champion Team Cyclone took 2nd, and Team Your Mom Again took 3rd. 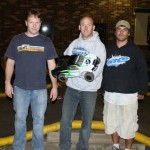 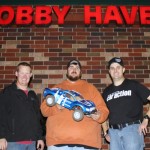