This past weekend the annual Wiregrass Nationals were held in Ozark, Alabama. The temperature was hot but the heavy showers on Friday and Saturday provided some temporary relief from the heat. The metal roof over the track protected the track from the elements, but there was no protecting the surface from the thrashing of the cars and trucks throughout the day.

The packed surface quickly gave way to the underlying sandy base providing some true off road racing with major dips, craters, and ruts. Drivers picked their racing lines carefully and were prepared to change as the race progressed. The Wiregrass crew with race announcer Carlton Eppes did a fantastic job of running the show and everything ran smoothly and timely.

The Pro Truggy class was TQ’ed by Mike Battaile and as the start of the 16 car main began, second place qualifier Barry Pettit was in hot pursuit. The remainder of the 45 minute race was a battle between the two, with Pettit coming out on top at the end, Battaile in second and Sean Kersten in 3rd.

Pro Buggy was also TQ’ed by Mike Battaile, followed by Billy Easton and Chris Pace. Battaile and Easton checked out quickly and swapped for the lead for the first few minutes. Barry Pettit, starting in fourth, had two rough first laps battling with the track and was in last place, not far from being lapped by the 2 front runners. Not to be denied, Pettit worked his way through the pack and passed Battaile and Easton as they closely battled before the end of lap 30. Several laps later Easton retired with issues and Pettit and Battaile were once again in the hunt for the first position. At the end of the 45 minute main it was Pettit coming out on top, with Battaile in second and Brandon Melton in 3rd.

The E-buggy class was TQ’ed by Florida’s Dan Borkowicz and with a Two A-main format, Dan quickly took advantage. In A-1 Dan took his JConcepts equipped RC8b to the top of the field and pulled away in the 10 minute race, with a freshly prepped surface lap-times were blistering. In A-2 Dan would receive heavy competition from Paul Wynn who had been having electrical problems throughout the weekend. Paul moved from the back of the pack to the front very quickly and now with functioning electrical, he was on a mission. Paul pulled out a slight lead with Dan closely following in 2nd. A few mistakes between the leaders allowed for the lead to change hands on a few occasions but Paul ultimately remained clean and took the win in A-2 with Dan finishing in 2nd. After combined results Dan Borkowitz was awarded the 1st place with Paul Wynn finishing in 2nd and Eric Varney in 3rd. In a sweep of the class, all 3 drivers were running on JConcepts tires and accessories. Dan’s tire of choice was the Subcultures in Green compound.

The track was brutal and challenged each driver and vehicle. Total concentration was the name of the game as every five feet of track provided a difficulty and just when you thought it was figured out, the five feet would change. The “pit of doom” was the make and break point of several side by side racing. Every racer to experience the weekend would come away from the event as a better off-road driver as well as a driver with a true appreciation of what it takes to not only race other racers but race the track conditions.

Barry ran blue compound Crosshairs on his truggy for the 45 minute main. They were the same tires he used in all 3 rounds of qualifying. Pettit states, “The Crosshairs work awesome in all conditions. Last week we were on an extremely hard packed surface and this weekend it is sand and loam. The tires worked great on both and continue to work as they wear.” Green compound Subcultures were the choice for the buggy. They provided the forward bite needed to get over the rough spots and accel in the rare smooth areas. Side bite was perfect and the tires rotated through the turns effortlessly. There simply couldn’t have been a better choice for tire! 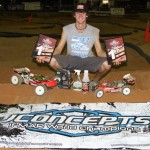 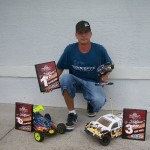 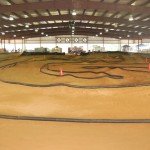 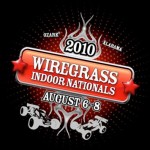