The CBRacing-JConcepts Team win the 8 hour endurance race organized by RC94 in Sucy-en-Brie, France (Paris neighborhood, race place of the Kyosho Masters). Starting in third, the car made it’s way to first after 35 minutes. Then, the team drove in a very secure way, holding the exact same rhythm, which was 1 hour 10 minutes of each 100 laps, all race long. The team performed 690 laps within 8 hours against 628 laps for the past year winner.

Using the brand New JConcepts Subcultures Elevated Bead 1/8th truck tire in Blue Compound on the new Elevated wheels, the team stated JConcepts provided a serious benefit to the brushless equipped Mugen MX6-T. “Those tyres provided great handling from the beginning to the end while the temp of the multi-surface track raised from 64°F (18°C) to 95°F (35°C). We only used 2 sets of Blue Subcultures tires throughout the entire race. A single stop saved us a lot of time“.

The winning MBX6-T Truggy was also equipped with a JConcepts Punisher Body and the brand New JConcepts Punisher 1/8 wing. This is the first time a Brushless car defeated the Nitro cars for that race. We should see more electric cars next year and many more JConcepts tires… 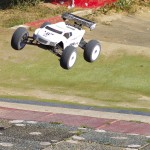 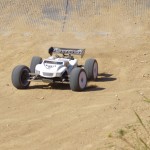 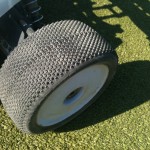