The race known for the amazing jumps, 24 hour program and psycho atmosphere made its way to the Southeastern arena in Unidilla, Georgia for the 2011 Psycho Nitro Blast. Jason Ruona and Paul Wynn represented JConcepts and were on-hand to support the product and team while showing the latest from JConcepts. Just under 500 entries packed the large arena for 1/8th nitro, electric and short course racing to do battle under the lights 24 hours a day.

With named obstacles like the Monster Energy triple and Shock Therapy the psycho track layout is always a topic of conversation in the pits. There is nothing quite like the first lap when attacking the 40-50 foot jump with a combination of uncertainty and power.

Qualifying started with Jeremy Kortz taking an early TQ in the 4×4 Short Course class by taking round 1 and 2 by a comfortable margin placing himself in the TQ position for Sundays double A-main format.

A-1 in SCT started just where things left off as Jeremy took a commanding lead in the opening few minutes. By main event time just negotiating the track was a challenge because of deteriorating conditions. Jeremy motored on through the difficult sections and found a rhythm and new racing lines as he crossed with an A-1 victory.

By A-2 conditions had worsened and Jeremy was up early before A-2 studying the racing lines. By the start he was already in-tune with the track, pulling away from the competition. With 2 laps to go Jeremy cruised home to an easy victory taking another short course victory in 2011. Jeremy’s Hobao Hyper SC was equipped with JConcepts all weekend. Double Dees tires in green compound, Rulux wheels and Ford Raptor body topped off the winning ride.

In the 1/8th buggy sportsman class, young John McGinty Jr. racing his Mugen MBX-6 got a great start in the main and remained in the top 3 for most of the opening 10-15 minutes. With his dad working a great pit strategy and quick stops, John quickly moved into the lead during the 25-30 minute mark.

Racing in his first 45 minute A-main, John remained calm and cool and remained in the lead by the 40 minute mark. Inheriting a huge lead with some breakage from the competition, John sat on a 2 lap-lead with only minutes to go as the pit crew nervously looked on.

Looking like a seasoned veteran, John made the last 2 laps look easy as he crossed the finish line with a huge win for the McGinty team. John’s winning MBX-6 sported JConcepts products all weekend. Hybrids tires in green compound, Mono wheels and Punisher body topped off the winning ride.

The 2011 Ironman award was presented to JConcepts / Mugen driver Barry Pettit. Barry, taking on 3 of the most difficult classes proved to be a worthy champion by finishing 3rd in Pro Truggy, 5th in Pro Buggy and 3rd in 1/8th Pro E-buggy.

Congratulations to all the winners and Psycho crew on another top notch event. 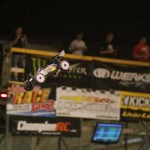 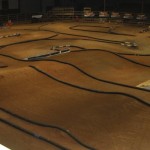 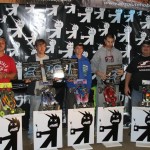 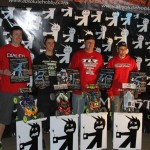 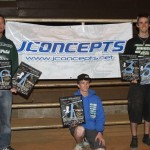 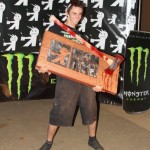