JConcepts takes Battle in the Desert Series round 1 JConcepts takes Battle in the Desert round 1.

The Battle in the Desert series kicked off round 1 at SRS Raceway in Scottsdale, AZ. Tanner Denney, Brian Kinwald and Jake Thayer had an amazing weekend with JConcepts.

In the 2wd modified class Tanner Denney sat on the TQ position with Jake “Jackie” Thayer 2nd and Brian Kinwald 3rd. As the main kicked off it was Denney taking advantage of a great start and placing his JConcepts equipped B4.1 out front. Kinwald moved into second and within striking distance but Tanner put in a complete race and crossed the finish taking a well deserved win. Dirtinator himself, Brian Kinwald finished 2nd and Billy Fischer 3rd making it a top 3 sweep for JConcepts, Punisher, Double Dees and Groovy products.

Moving into modified truck, Brian Kinwald looked amazing as his JConcepts equipped, ICON powered T4.1 tackled the technical SRS track with a TQ run in qualifying. In the main “Dirt” was gone and off into the Sunset for a Modified Truck victory. JConcepts Punisher body and Double Dees tires finished off the winning ride.

Last but not least, Jake Thayer put on a clinic in the 4wd modified class. Jake’s favorite vehicle was on rails all day and performed flawlessly by taking the TQ and win in the competitive class. Jake’s 4wd buggy was outfitted with Punisher body and JConcepts Double Dees throughout.

Congratulations to the SRS crew on another fine event. 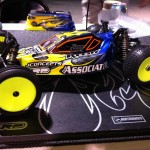 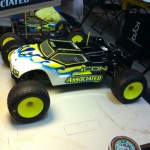 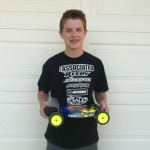