Round 2 of the North Carolina Championship Series drew 159 entries to King R/C in King, NC this past weekend. Racers showed up from Maryland to Georgia to see who would have “King” status at the end of the day. The track was in prime condition after being worked over Thursday by the King track staff. JConcepts driver Jason Smith made the trek from Myrtle Beach, home of the series finale at the Badlands R/C later in October. Although it didn’t come easy, Smith was able to capitalize on a “double down” win, showing that although he missed the first round, he will be a major player in the overall standings.

The expert buggy class seeds the top 2 qualifiers directly into the final. Hot Bodies driver DJ Hepler would be the only driver to obtain a 10 lap run in qualifiers and gaining overall TQ honors. Team Associated Driver Chris Pace would just miss 10 laps, but would run consistent enough to hold on to the 2nd spot on the grid, leaving all 37 other drivers fighting for the remaining 10 spots. Bumping 5 drivers from each semi, there was exciting racing and plenty of heartbreak during these races. Jason Smith would prove during the first semi that he would be someone to watch by winning the 30 lap semi final by 17 seconds over 2nd place finisher Jake Stikeleather, showing he can still run up front after a few month layoff. The second semi would be won by Z Car Driver Don Elliott, who’s no stranger to the North Carolina clay, followed closely by Kyosho’s James Banta. Hot Bodies driver Mike Webb would suffer disappointment while leading the semi on the last lap, while running out of fuel about 60 feet from the loop, allowing Josh Hollifield to move from 6th to 5th in the last corner to take the last transfer spot into the final.

At the start of the main, everyone stayed single file until getting onto the back straight where TQ man DJ Hepler would traction roll, allowing Chris Pace to ease into the early lead. Pace would maintain a lead through the first pit stop, until he flamed out about half way through his pit lap. After restarting, he would enter the race a couple laps down, killing any chance of an AE double win (Brandon Sheets’ Reedy powered RC8B won the open class). A 3 way battle would break out between James Banta, Barry Pettit, and Don Elliott over the next few minutes, with each driver leading a share of laps. Elliott would be the second driver to suffer a flame out while leading the event. A rough start for Jason Smith would be overcome by a nice drive to the front, joining the lead battle about 20 minutes into the race. Pettit and Smith would play cat and mouse over the next couple minutes, until Pettit experienced a flame out over the back table top, the third driver to give up the lead due to engine troubles. Hepler would recover from his bad start and join the race with Banta and Travis Phillips for the 2,3,4 spots. At the checker, Hepler would regain 2nd spot, followed by Phillips rounding out the podium. Jason used the new JConcepts Hybrids tire to last the entire main and give him the speed to win.

The truck division did not share the same drama as the buggy division. DJ Hepler would take TQ in the truck class as well, giving him the honors for both nitro classes. Jason Smith, winner of buggy class, would qualify 2nd with Chris Pace 3rd. Hepler would lead the first segment of the main until a mistake let Smith take over the lead. Smith would never look back and build a comfortable lead throughout the race. Hepler would experience a long stop letting Pace take over the second spot. At the end of the race, Smith and Pace would remain on the same lap after the 25 minute main, with an extra lap on the rest of the field. After the difficulty in the pits, Hepler would still hold onto the last podium spot.

The 3rd round of the series is located at Cape Fear Raceway on May 28th, the largest and fastest track on the series. 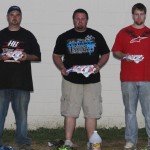 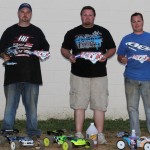 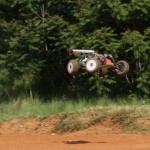 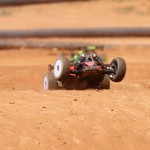 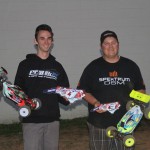