The JConcepts Indoor National Series traveled into Carrollton, TX for the Spring Indoor Nationals, hosted by Mikes Hobby Shop. For the 2nd annual event in a row, a near capacity of drivers turned out for what has become a must attend event in Texas. Defending champion, Steven Hartson was back in attendance along with Round 1 winner Ryan Maifield. TLR / JConcepts drivers Dustin Evans, Taylor Larsen, Cody Hollis and JR Mitch were out in full-force to challenge the talented Team Associated duo on the newly built, polished but grippy, racing surface. A full practice day on Friday allowed drivers to break-in the track surface and also review tire selections and vehicle setups prior to qualifying.

Cody Hollis came out swinging in the modified truck class earning the first round TQ over Dustin Evans and Ryan Maifield. Cody’s TLR 22T was hooked via the JConcepts green Pressure Points and served notice he was going to be a factor all weekend in the class known as the Racing Truck class. Ryan Maifield struck first in the 2wd modified class running an error free round 1 qualifier placing the Team Associated B4.2 in the top position. In the 4wd modified class it was once again Maifield who turned heads with a blistering run with the B44.2 taking Round 1 convincingly. Dustin Evans served up a clean run in the 2wd modified SCT class placing the 22 SCT out front with the Green Compound Pressure Points tires. Taylor Larsen took the top spot in the 4×4 SCT class with the SCT-E 2.0 vehicle putting down an ultra quick 15 / 5:05 on the still morning green condition surface. Round 2 of qualifying was almost a mirror image of the first round with the same drivers looking dominant. JR Mitch was the only different driver to break-through and TQ for the round in the 2wd modified SCT class. All other modified classes looked identical with Cody Hollis, Ryan Maifield and Taylor Larsen going quick during the 2nd round of qualifying. With an improving track surface drivers overall times dropped considerably which was important because overall qualifying was based on a drivers single fastest time.

For round 3 it was apparent drivers had put on their game faces as the track surface was really starting to groove in and lap times were improving. Overall and TQ runs were in serious jeopardy for many drivers and a few desperate drivers racing in the C and B resort heats had one last shot at jumping into the A-main. Dustin Evans and Ryan Maifield went 1 and 2 in round 3 in the Modified Truck class but 2 mistakes by both drivers allowed Cody Hollis to remain TQ going into Sunday’s main events. Steven Hartson jumped from the B-main resort to the A-main with a great 16 lap run making the A-qualifier drivers slightly nervous with the tracks speed and potential. During the A-qualifier Ryan Maifield looked consistent out front, once again putting down lap after lap with speed and consistency and besting his own time and retaining TQ in the 2wd modified class. Maifield easily retained the 4wd modified TQ with another blistering run and 3 straight qualifier TQ’s to put the JConcepts equipped B44.2 on the pole position. With the green compound Pressure Points gripping the dirt, Dustin Evans took the fastest time of the weekend in the 2wd modified SCT class with 16 / 5:17 assuring himself P1 position on Sunday for the main events. Taylor Larsen outlasted everyone in the 4×4 SCT class and once again establishing himself as the overall TQ taking Q3.

Modified truck A-main hit the track early on Sunday morning and Dustin Evans quickly got into the lead with Ryan Maifield in 2nd. A mistake by Dustin gave Maifield the lead which he held to the finish. Taylor Larsen finished 2nd and Dustin Evans 3rd. A2 began with Cody Hollis and Dustin Evans getting a great start. Maifield got caught up in traffic allowing the front group to escape away from the field. Dustin Evans took A2, Cody Hollis 2nd and Taylor Larsen in 3rd. Each driver was on point and ready to begin A3 with the championship on the line. The main started with Cody Hollis giving way to Dustin and Maifield to let the top 2 drivers battle it out for victory. Evans led many laps with Maifield all over his rear bumper. The tandem of JConcepts equipped drivers blistered the track until a rail slide by Maifield allowed Dustin some breathing room. After the mistake, Evans opened up a 4 second gap which he maintained until the finish. Ryan Maifield took 2nd overall and TQ driver Cody Hollis 3rd.

The 2wd modified class went through Maifield as the steady B4.2 with green compound Bar Codes sat on the pole position. During A1 Maifield bolted off with a great start distancing himself from 2nd and 3rd place. The top 3 drivers were all quick in lap-times but Maifield stretched the lead slightly. Mistakes in 2nd and 3rd allowed Maifield to escape and he was gone and crossed the finish for the easy win. Dustin Evans finished 2nd and Cody Hollis 3rd. A2 started in a similar manner with Maifield out front and looking to stay clean. 2nd and 3rd place drivers had problems coming on the straight and Steven Hartson took over 2nd place. Maifield was out front and cruising, allowing Steven to close the gap on the leader slightly, but a mistake by Steven dropped him out of contention. Maifield crossed the finish line with the JConcepts equipped B4.2 to take the victory and the overall championship. Dustin Evans finished 2nd and Taylor Larsen in 3rd. A3 went to Dustin Evans with 1st place, Steven Hartson 2nd and Cody Hollis 3rd. After the overall results were tabulated it was Maifield with the win, Dustin Evans in 2nd and Cody Hollis 3rd. All 10 drivers in the A-main were utilizing JConcepts Racing Tires.

The 4wd modified class belonged to Ryan Maifield. After impressive TQ drives to place up front, Maifield continued the domination in A1 with an easy victory. The B44.2 was effortless as Ryan put the race away in the first couple laps not allowing anyone close. Steven Hartson finished 2nd and Aaron Breuer 3rd. A2 was very similar as Maifield again got the jump start on the competition. Maifield drove away from the field making minimal mistakes throughout, closing out the 4wd modified class in 2 very easy mains. After breakage from Steven Hartson, Kyle Skidmore finished in 2nd and Trevor Nault 3rd. A3 began with Steven Hartson opening up a large gap and running consistently quick. Hartson stretched the lead on Trevor Nault who was driving a great race of his own. Hartson crossed for the A3 victory, Trevor Nault 2nd and Aaron Breuer 3rd. JConcepts swept the podium with Ryan Maifield taking 1st place, Steven Hartson 2nd and Trevor Nault 3rd. 2wd modified SCT was one of the most popular and competitive classes all weekend. TQ Dustin Evans looked in tune with a great start in A1 with JR Mitch in 2nd. JR looked extremely locked in making up a small amount of room on Dustin as the 2 drivers battled for a short period. Dustin turned it up a notch after a small mistake by Mitch and captured the A1 victory. JR Mitch finished 2nd and Cody Hollis 3rd. A2 started with Evans again getting a great start. Dustin powered down on the TLR 22 SCT with fresh JConcepts Pressure Points and put the race out of reach. Dustin crossed the finish for victory locking up the overall with JR Mitch again finishing 2nd and Taylor Larsen 3rd. A3 had Taylor Larsen drive a picture perfect main running the fastest SCT main event time of the weekend. Steven Hartson finished 2nd and Cody Hollis 3rd. The finishing order was Dustin Evans 1st, Taylor Larsen 2nd, JR Mitch 3rd, Cody Hollis 4th, Steven Hartson 5th and Daimon Borkowicz 6th. The top 6 drivers all relied on JConcepts Racing Tires in green compound.

The opening main in 4×4 SCT was quite interesting. Taylor Larsen encountered some electrical issues which opened the door to the rest of the field. Nathan Hale took advantage winning A1, Steven Breuer finished 2nd and Mitch Roberts 3rd. A2 began with Taylor Larsen checking out on the competition. With his electrical problems a thing of the past the TLR driver locked up a solid victory in A2. Nick Sublette finished 2nd and Steve Breuer 3rd. A3 was at the line and once again Taylor Larsen left the line on schedule. Taylor hammered down on the green compound Pressure Points tires taking a large lead. As Taylor was checked out, Jeff Bernier moved into 2nd and took part in a battle of his own with Nick Sublette. At the finish Larsen capped off a successful weekend taking 1st place overall, Jeff Bernier finished 2nd and Nick Sublette 3rd. After scoring calculated the points the finishing order was Taylor Larsen 1st, Nick Sublette 2nd and Steve Breuer 3rd.

A warm thank you must be given to the entire Mikes Hobby Shop staff. A top notch layout, nicely maintained surface and the usual outstanding facility with stocked hobby shop make this one of the best events on the JConcepts Indoor National Series Tour. Please visit RedRC.net for a step by step report of the event and amazing photos and video. We all look forward to April, 2014 for the 3rd annual visit to Mikes Hobby Shop. 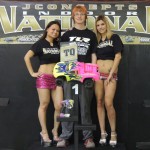 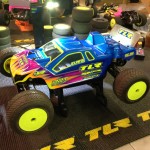 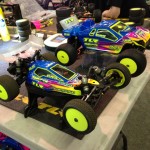 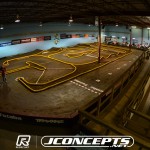 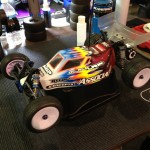 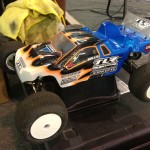 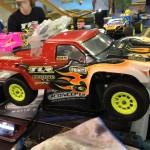 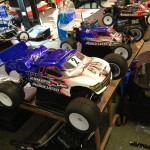 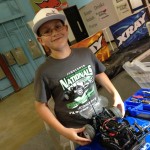 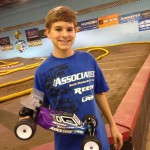 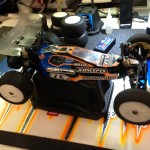 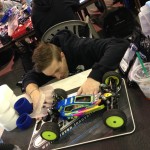 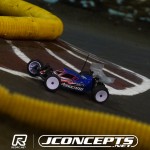 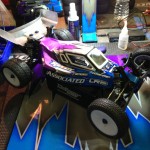 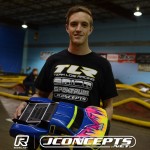 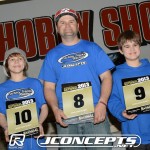 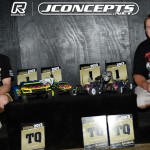 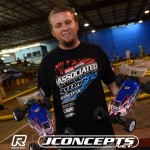 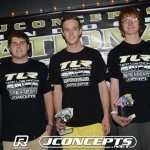 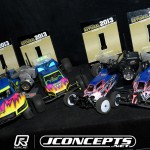 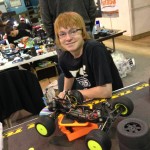 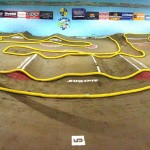