JConcepts took the show on the road, all the way to the country of Finland to support drivers competing in the Coolest Race Ever, the 1/10th IFMAR Off-Road World Championships. Chosen as control tire for 2011 IFMAR World Championships in Vaasa, Finland, JConcepts was out in full force. Double Dees provided the grip for the rear of the all the 2wd buggies while Flip Outs provide the 4wd front and rear grip to all drivers. 2wd front tire selection was open and while drivers experimented in practice with many different tires, it was the Rips tire in green compound that dominated qualifying and the main events. As always, the race starts with an opening ceremony which celebrates all the competing drivers from participating countries followed by the concours de’ elegance. Concours is always a fun event at the Worlds and a first opportunity to see competitors cars, any new products or the best paint schemes that will be racing during the World Championships. The 2 classifications by the race organizers were cool and best and while cool was easy, best was much harder to decide. In the end Lee Martin took the fun and entertaining concours competition with his fine looking Tamiya buggy.

Qualifying in the 2wd class was led by none other than Neil Cragg from Great Britain. An amazing qualifying effort in round 5 placed him out front, nipping a group of 3 other drivers running 12 laps in 5:02. Ryan Cavalieri sat in the 2nd position, Ryan Maifield lined up 3rd and Jared Tebo 4th. After a practice A-Final in the books the drivers all prepped for the triple A format which took place roughly an hour after the practice final.

The first 2wd main would start with a crash over the big double jump and Neil Cragg and Ryan Cavalieri would lead out. A mistake by Cavalieri put Tebo into 2nd and chasing the leader hard. Tebo would make the pass stick on leader Neil Cragg over the large double jump. Neil Cragg made a mistake on the double allowing Cavalieri back through but Tebo was out front and just cruising. The finishing order in A-1 ended with Jared Tebo first, Ryan Cavalieri 2nd and Neil Cragg in 3rd.

A-3 suddenly took a major turn when on the warm-up lap TQ driver Neil Cragg’s car broke and he was unable to start the main. This unfortunate incident set the stage for a 3 car race with Cavalieri sitting out front, Maifield 2nd and Jared Tebo in 3rd. An amazing race set-in with the 3 drivers taking off from the rest of the pack. Ryan Maifield heavily charged the lead and made several attempts at overtaking for the lead. Cavalieri remained strong and did a great job at closing the door, keeping Maifield just a tick behind. Tebo was alone in 3rd place and mysteriously took a weird jump breaking the vehicle taking him out of contention.

Maifield made a move over the big double jump and dove to the inside and appeared to have a pass in-hand but vehicles touched sending Maifield in the opposite direction allowing Cavalieri a small amount of space in the lead. The race finished with Ryan Cavalieri taking the win and the IFMAR World Championship title and Ryan Maifield 2nd and Dustin Evans 3rd.

By virtue of the control tire, all drivers were utilizing the JConcepts Double Dees rear tire on the 2wd buggies but interestingly enough most drivers preferred having them broken in or in used condition during racing. During the A-final events both Ryan Cavalieri and Ryan Maifield were running tires with at least 4 complete races of break-in. The tough AE combo did their damage in the A-finals with used rear tires and the Rips front tire in green compound. 4wd qualifying started with JConcepts / Team Associated driver Ryan Maifield getting off to a terrific start. Ryan TQ’ed the first 2 rounds of qualifying placing his B44.1 out front with JConcepts’ new Finnisher body and Hi-Clearance rear wing. Round 3 belonged to JConcepts / Durango driver Joern Neumann who set the fastest run of the weekend in a brilliant performance described as the perfect qualifier. Round 4 got rained out partially through which set the stage for a Maifield vs. Neumann 5th and final round of qualifying to determine TQ. Round 5 started with Joern leading with Maifield in 2nd and the two racers battled for the overall TQ position. Joern made a costly mistake on the quad jump which put Maifield into the lead for good and with only a few laps remaining Maifield cruised in for Round 5 TQ and with it overall TQ for the event. Joern Neumann took 2nd overall qualifier and Ryan Cavalieri 3rd. A-1 started and Maifield led the group of drivers for many laps until he came up short on the quad which set his car tumbling into another lane and opened up the lead to Joern Neumann. Joern was checked out with a 5 second lead and while drivers battled behind for positions 2-5th he increased his lead. The unbelievable happened when Joern’s Durango suddenly stopped in the chicane from an apparent motor problem dropping him out of the field. Ryan Cavalieri was in position to capitalize and took the lead with Jared Tebo in 2nd and Neil Cragg 3rd.

A-2 began and Maifield led out once again over the rest of the field. Maifield, the first to come up short on the quad jump gave up the lead to Joern Neumann who was then out front and leading. Joern appeared in control of the race until a crash in the whoops sections sent his Durango flying off the track which took a few moments for the turn marshal to recover. Ryan Cavalieri once again scooped up the lead and would not let go of the golden opportunity to win in 2 main events and wrap up his second title of the weekend. Crossing the finish line ever so carefully, Ryan Cavalieri took home the 4wd IFMAR World Championship bringing his personal total to 4. Jared Tebo finished in 2nd and Joern Neumann 3rd.

With many positions still up for grabs, A-3 started as the previous 2 with Maifield in the lead. Maifield, driving his best, took command and appeared strong throughout, taking on pressure from Joern all the way. Joern made a small mistake which gave Maifield a small amount of distance and some much needed breathing room. Joern, attacked for the last several laps trying to make up lost time and got within striking distance with only 2 laps to go. Maifield held the lead confidently down the back straight-away on the last lap and negotiated the chicane and checked up slightly for the tricky step-up jump. Checking up for the step-up allowed Joern to close ever so slightly and during the check-up Maifield hit a small rut making his B44.1 change directions violently into the pipe. In an amazing finish which might be impossible to duplicate, Joern squeezed through with only the smallest amount of room available and crossed the finish line in first. The pass sent spectators and the crowd into a frenzy and ended the event with a highlight for all to witness. Joern finished in 1st place with Ryan Maifield 2nd and Hupo Honigl 3rd. The control tire in the 4wd class was the JConcepts Flip Outs tire front and rear in green compound. The round pin / bar support style tire worked very well on the Vaasa track conditions and provided a deep tread of traction for drivers all weekend. Many drivers mounted extra tires but stayed with 2-3 sets for the entire weekend proving to get results on 5-6 runs and on very little tread for some of the A-main drivers. Different tread heights seemed to benefit different driving styles with the lower tread lending itself to smoother conservative drivers while taller tread worked well for drivers reaching deeper into the trigger or wider lines on the track. Flip Outs with And-1 inserts were a great combination and choice for the 4wd class. We would like to thank the city of Vaasa, Motorsport club of Vaasa, Jussi Luopajärvi, Scotty Ernest and each of the over 100 volunteers that organized, built and directed the Coolest race ever. 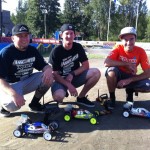 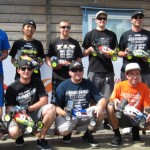 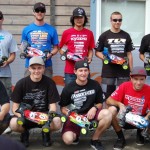 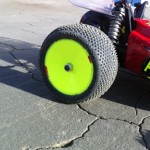 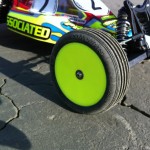 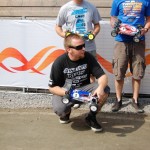 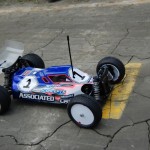 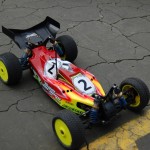 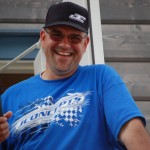 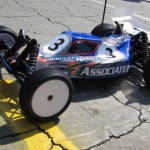 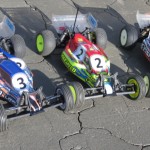 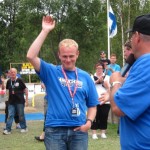 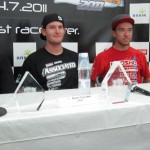 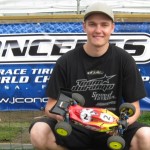 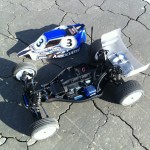