JConcepts Punished Both Classes at the Greek Championships

Last weekend was held the National Championship of Greece at Arena track in Athens.
In 4wd class our Team driver Kostas Zacharopoulos with his Team Associated B44 equipped with JConcepts tyres made the TQ winning 4 out of 5 Qualification runs , and acquired the championship winning 2 out of 3 Final runs. Kostas also held the track record with a time of 10.622 and was the only driver under 11.000 seconds. The grip of the track was in pretty high levels. He used the JConcepts Bar Codes for both front and rear in blue compound ( #3016-01 & #3020-01). The tyres performed really well at the whole event. At the same class A. Papagiannakopoulos managed to win the 3rd place ahead of the competition on Double Dee’s both on front and rear (#3002-02 & #3003-02)

In the 2wd class was A. Papagiannakopoulos who won the Championship after having same points with Greg Kontouzoglou but better 3rd run. He qualified 3rd , and held the track record using JConcepts Groovy on the front ( #3004-02) and Double Dee’s on the rear (#3002-02). At the Second placed finished Greg Kontouzoglou starting from the second place of the grid using JConcepts Rounder on the front (#3005-02) and JConcepts Flip Out on the rear (#3038-02) 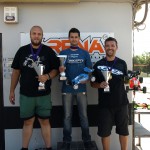 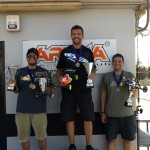