The Centro C4.2 conversion kit has been an instant hit with racers wanting to convert the race winning B4.2 into a mid-motor buggy. JConcepts has immediately jumped on-board with options and accessories for this highly competitive vehicle. The R&D team at JConcepts quickly identified 3 key areas where the C4.2 could be improved upon. In stock trim the C4.2 includes a molded rear bulkhead which is highly flexible and a target to damage in severe crashes. The JConcepts suspension kit includes an all CNC machined aluminum version which has been trimmed, narrowing the stance allowing more room for narrow rear pivot camber link adjustments. The bulkhead is available in blue or black color and has silver chamfered edges around the border and inner cut-outs. The tucked design, trimmed shape and pocketing give the racer an extremely durable yet light-weight piece.

The 4mm Carbon Fiber shock tower has all the necessary adjustments including the standard outer (C4.2) camber link positions and the newly added inboard camber link holes to accommodate a narrow pivot rear suspension. The shock tower has the JConcepts touch, including added rib positioning to strengthen the tower where appropriate and to allow big bore shock and transmission clearance where necessary. The upper shock mount positions have been relocated to allow for proper rear suspension droop while all holes are designed on an arc to minimize droop changes during setup changes.

The final touch to the assembly are the aluminum rear wing mounts. The stock wing mounts place the wing extremely high on the vehicle, raising the center of gravity and increasing the pendulum effect of the rear-end. The JConcepts wing mounts place the wing more than 7mm lower than stock and have been spaced closer to accommodate the more popular wings on the market, allowing a more interchangeable wing between the B4 and C4 vehicles. The aluminum wing mounts are light-weight, durable and set the wing at just the right height giving the vehicle a more natural rake in appearance. All additional 4-40 hardware is included to make the conversion a snap. Upgrading to the JConcepts rear suspension kit gives the racer more performance, durability, functionality and more wing choice flexibility. 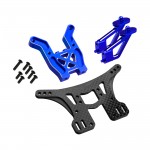 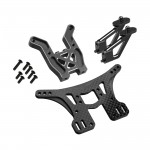 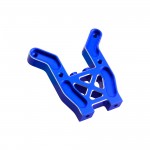 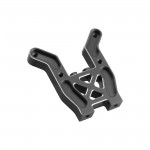 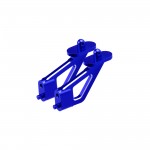 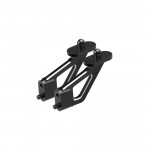 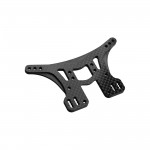