Round 5 of the JConcepts Indoor National Series was held in Ocala, Florida, this past weekend. The series has been very popular at the other stops throughout the tour, but this was the first time the series travelled south to the home state of JConcepts. NewRed Hobbies in Ocala, Florida, was the host, with a strong local program and a nice all around facility with a stocked hobby shop, food services permanently on site, covered outdoor pitting to soak up the Florida weather and a nice sized indoor track.

For this event, a fresh layout was installed and as practice got under way, racers worked to see what was going to be the best combination to get them to the front. There was no shortage of traction, as the surface of the fun, flowing layout was getting to a level that hasn’t been seen by the local drivers on hand. For the racers who travel, it was just business as usual, knowing what to do to the set up and tire preparation. With the drivers getting the circuit dialed in, lap times were starting to drop and it was only going to get faster as things heated up for the TQ in each class.
Saturday was three rounds of qualifying as race director Matt Mosieur kicked off the first rounds following the drivers meeting. With the flawless program running through the rounds, it was all up to the drivers to put their best foot forward and get a clean, fast time to use for their Qual-Points total. A resort after round 2 set the heats where the drivers were grouped together closer to their speed, so round 3 and Sunday’s round 4 were set to be clean and fast. Triple A main format, with 2 bump-ups from the lower main would fill the 10 car field. With the mains set, it was time to determine the Champion of each class, in the final JConcepts Indoor National event.
First up was Pro2 Mod. With local Zach Genova on the pole, he led for the first 3 minutes until pulling out, with Losi/JConcepts driver JR Mitch taking control of the front of the field. Mitch was closely followed by the AE/JConcepts train of Paul Wynn, Daimon Borkowicz, Max Flurer, and John Piant. At the end of the 5 minute main, that would be the order.

A2 would see Zach take the win, with heavy late race pressure from the young Daimon Borkowicz, followed by Wynn, Flurer, and Mitch working his way up from a very rough first lap.

A3 would determine the final order, with no clear cut advantage. At the tone, from the pole, Zach had pressure from Paul Wynn, with Max Flurer on Wynn’s bumper, and Daimon close behind waiting on a mistake. With about a minute to go, a roll over in the sweeper from the leader dropped Genova to third, and the race was on between AE/JC Paul Wynn, and Max Flurer. Paul would hang on for the win. With the points calculated, the overall order would be JConcepts Paul Wynn on the top step, Genova 2nd, and Daimon Borkowicz on the podium in 3rd.
Pro2 Stock was owned by the California duo of MIP, Matt Olson taking the first two A mains to wrap up the overall, and MIP’s creator Eustace Moore taking 2nd on the tie breaker over Florida’s Jonathan Paulk after some very close stock racing.
Next up was 2WD Mod. A1 would have TQ Steven Hartson with a wire to wire win. However the big mover was JR Mitch with a charge to the front from his 6th on the grid, to finish 2nd followed by a freight train. All of the top 6 were running Barcodes in Gold compound front, and rear.

A2 was an awesome battle, as the top three from the grid got away clean, as they chased down the leader Hartson so it would have to go to A3 to be decided. Hartson, with a mistake allowed Thielke into the lead, and Ruona right there on the bumper of Hartson. A pass put Hartson back in front, as he was chased, but with time running out, a last lap attempt by Thielke caused the two to tangle. Ruona went by but clipped the pipe going around the marshal, as Hartson and Thielke sprinted to the line side by side. Steven Hartson with the win and the class Championship, would be watching A3 from the side.

The exciting racing did not make it to A3, as Brent Thielke lead wire to wire, followed by a strong drive by Paul Wynn, with Ryan Eckert finishing 3rd. With the score tallied, it was Hartson on top, with Brent Thielke 2nd, and Paul Wynn 3rd. Jason Ruona 4th, to sweep with JConcepts.
2WD stock buggy went to three main events to decide the Champion, but local Aaron Smith taking the last two mains, clinched the title. Cody Wiles used his home track atmosphere to finish 2nd and the Billy Bruce kept the kids honest, taking the last step on the podium.
Truck Mod had TQ Brent Thielke, with his JConcepts equipped T4.1 leading A1 but a mistake would drop him back as local Zach Genova took the lead. Brent worked his way into 2nd and stayed there as the race finished out. with Caleb O’Hara in 3rd. A2 was all Brent Thielke with a wire to wire win, followed by Daimon Borkowicz for a JConcepts one – two, and Genova 3rd. With the title undecided, A3 would be intense, at the tone, Thielke bobbled early, allowing Genova in the lead and it was over. For the overall, it was Genova, Brent Thielke 2nd, and Daimon Borkowicz in 3rd.
4WD Mod Buggy had Steven Hartson with the TQ and in A1, Hartson showed why. With a clean track, he led the entire time, with a comfortable margin, laying down some incredible lap times in the process. Jason Ruona worked his way into second place and tried to put pressure on Hartson, bringing Max Flurer with him. At the finish, it was Hartson, Ruona, Flurer, and JConcepts equipment with the top six cars.

A2 was more of the Hartson show, as he stayed out front with his Bar Codes in Gold compound. Ruona moved around Flurer for 2nd and held on to cross the line.

A3 had Max Flurer in the lead, being hounded by Felix Law. Law would move into the lead, only to suffer mechanical issues, handing the lead back to Flurer. Ruona had worked his way up from a rough first lap and went into the lead on a mistake by Flurer. Lapped traffic would play into Flurer’s race, as he got the lead back and finished off with a win, followed by Ruona, and Genova. For the overall, it was Steven Hartson with his second Championship, Jason Ruona with 2nd, and Max Flurer rounding out the podium in 3rd. JConcepts swept the top five positions.
Stock Truck had Jonathan Paulk with the TQ, and winning A1 and A2 for the win. Super consistent Kory Ferguson with three 2nds, taking the number 2 spot. Gary Choosewood rounded out the podium with an A3 win.
Pro 4 had MIP’s Matt Olson on the pole. In A1, Matt had a rough lap and he fell back to mid pack, allowing a battle between Felix Law and Max Flurer. Steven Hartson would battle Law with Flurer in command, but in the end it was Flurer, Law and Hartson for A1.

A2 Olson was out front, followed by Hartson, being hounded by Law. The two would tangle, moving Flurer into 2nd and dropping Hartson to 4th. Flurer tried to chase down Olson, but Olson would have none of that, taking the win, followed by Flurer and Law.

A3 would decide the final race of the day. From the start, Olson had the lead, but a mistake would put Hartson on point. Hartson with a bobble would drop him to 3rd, with Olson in front and Flurer in 2nd. A mistake by Flurer would allow Hartson into 2nd and for the last five laps would do some incredible lap times to try to run down Olson crossing the finish line only 8 tenths behind. For the overall, it would be Olson with two wins and the Championship, Max Flurer in 2nd, and Felix Law in 3rd, with JConcepts taking the top six spots.
Awards were given out to the drivers in the top five positions. A special appearance by Sierra, along with help from Taryn, drivers had one more reason to smile at the end of a long weekend of racing. NewRed Hobbies provided a perfect end to the Indoor National Series for 2012. Close battles and a lot of fun in central Florida. What more could you ask for?

See you next year as the series starts again near St. Louis at Smac Trac Raceway February 9-10, 2013. 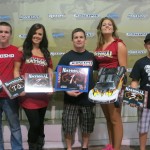 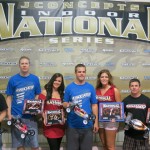 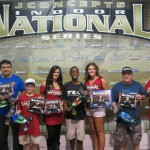 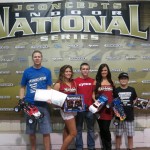 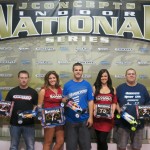 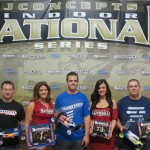 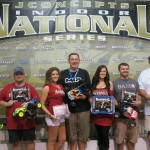 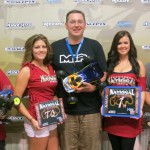 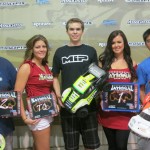 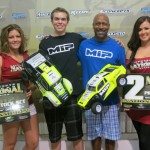 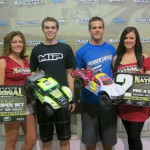 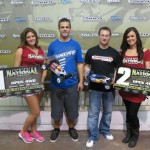