JConcepts Factory driver Ray Munday continued his unbeaten record in the 2011 ORRCA Victoria Drivers series with a triple victory at the 2nd round held at Mildura. 108 entries were received for the event, even more impressive considering that Mildura is 6 hours drive from Melbourne. The Mildura track is one of the best in the country with a fun and flowing layout and a clay surface that grooved up through the day.

2WD Mod:
Qualifying in 2wd was a tough affair with 3 different winners over the 3 rounds. Conditions were difficult with some short rain showers appearing during the 2wd mod heats. Logan Symes (Losi 22) impressed with a TQ in round 1, while Ray Munday (B4.1) took out round 2 and Ben Sterling (RB5) won round 3. Ben Sterling got TQ on countback, Ray in 2nd and top nitro driver Adam Alexander (Losi 22) 3rd in a rare EP outing.

4WD Mod:
4wd was a clean sweep for Ray Munday, his B44 working sweetly despite not being able to attend practice. Logan Symes (B44) qualified 2nd and Ben Sterling (ZX-5 FS2) 3rd after some mechanical gremlins. All three used JConcepts Double Dees.

2WD Mod Mains:
As has been the case for the last few rounds, the finals were a tough battle between Ray and Ben Sterling. In A1, Ray managed to pass Ben on Lap 1 and lead all the way to the wire. In A2, Ben and Ray pulled out a gap from the field with Ben holding a 1 second lead. At about half distance, Ben made a small mistake in the far section and ended up on the wrong side of the pipe, giving Ray the lead which he held to the end to take overall victory. In A3, Ben took the win with FTD to secure 2nd overall, Adam Alexander showing he is quick in electric with a 3rd placing.

4WD Mod Mains:
4wd went down to the last lap in the third main. In A1, Ray got away to an early lead and never relinquished it, but Logan Symes and Ben Sterling were never far behind. Ben managed to pass Logan at the 4 minute mark for 2nd. In A2, Logan Symes took a strong win after Ray made an early mistake, Ben Sterling tangling with him while on his roof. In A3, Ray made a mistake over the tabletop on lap 1 dropping to the back of the pack, while Logan and Ben shot off to the lead. Ray drove hard to work back through the pack, and with 2 laps to go had caught up to Logan in 1st. Logan ran slightly wide on the first corner of the last lap, allowing Ray to sneak past under brakes into the hairpin. When the points were tallied, it was Ray 1st, Ben 2nd and Logan a unlucky 3rd.

Truck Mod Mains:
After earlier securing TQ from Adam Alexander and former national stock champ Scott Cameron, Ray easily won all 3 finals with his T4. He was able to use the same pair of Double Dees all day. 2nd overall was Adam Alexander, enjoying his EP outing and 3rd was Scott Cameron . 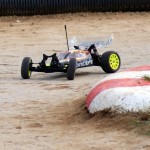 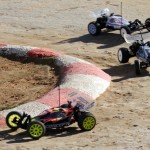 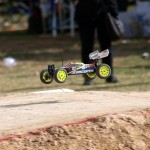 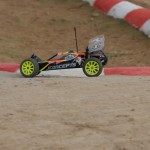 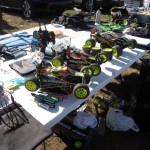 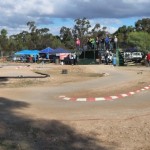