Here in beautiful Southern California it was time to showcase an all modified race at West Coast Raceway, and Ko Propo did just that with the 1st annual KO PROPO America Open Off-road Championship.

With some of the best drivers California has to offer spread throughout all the classes you could bet that racing would be close all weekend long! The three crowd favorite races were expert mod 2wheel and 4wheel classes, and without a doubt expert 1/8th scale buggy. Steven Hartson of Associated/JConcepts would be the one to put it on pole position in all three of those classes. While Steven had wrapped up those classes he would be found cheering on his young teammate, Jimmy Barnett, whom found himself starting first on the grid in both his classes, sportsman mod 2wheel and 4wheel. As Saturday qualifying came to an end, everyone wrenched on their cars to get ready for the triple A mains in the morning.

Sunday had arrived and now the most important time to shine had came. It was almost a perfect rerun of qualifying for Steven Hartson and Jimmy Barnett as they both took home the wins in all of their classes after A2, letting them sit back and watch the rest of the field battle for positions in A3. Which in the expert 2wheel class let JConcepts driver Zack Rogers take home second right behind Hartson. In expert 4wheel it would be a JConcepts 1,2,3 sweep as Zack Rogers would again take second and Cody Turner taking home third!

West Coast hobbies in La Mirada California, is quickly becoming one of the
nicest facilities in the country. With the Reedy Invitational Championships
only a few months away, West Coast hobbies held the first annual Ko Propo
Off Road Championships. This premium indoor off road track produces great
races year around. It’s hard to beat the beautiful SoCal weather outside,
but the conditions are always perfect indoors. This was an all modified
motor race, with Open and Pro classes separating the drivers. With over 120
entries, JConcepts was well represented by a great group of drivers. Steven
Hartson, Cody Turner, and Zack Rodgers took the challenge of the Pro class,
while young up and coming JC driver Jimmy Barnett raced in the competitive
Open class.

The 60’x120′ track was in great shape as qualifying began. In Pro 1/8th
scale buggy Hartson’s pace would end up being untouchable by the rest of the
field. TQing the first and second round on Gold Bar Codes Hartson decided to
sit out the third round, in order to rebuild his buggy and get it ready for
the mains the next day. Randy Kung ended up finishing just behind Steven in
qual points giving him the second spot on the grid.
With the field set Hartson’s Associated RC8Be sat in the number one box for
the beginning of the triple A mains. Perfection was the only way to describe
the first 1/8 scale A main, leading every lap, Hartson was able to take the
first race. With the second main starting Hartson knew the title was his
with another win, and that’s exactly what he did. Jumping out to a big lead
early Hartson was able to cruise to his second win and capture the class
win. With the win already wrapped up Hartson sat out the third A main to
watch some of the great action. Kyosho driver Carson Wernimot, who had
finished second in the first two mains went on to take the third A main and
insure himself second overall. Rounding out the overall podium was track
owner Danny Stojakovic.

Pro 2wd modified buggy was the class to gather around the track and watch.
With tons of traction from the awesome clay at West Coast, drivers had no
problem pulling the trigger in 2wd. JC driver Cody Turner was the surprise
in round one, by taking the TQ over Hartson by 2 seconds. Steven would
rebound from the first round, to go on and take rounds two and three, to was
again capture the overall TQ in 2wd buggy. JConcepts drivers Steven Hartson,
Cody Turner, and Zack Rogers started the mains 1,2,3 on the grid. Hartson
would soon become once again unstoppable, winning the first and second A
mains. For the beginning of the third A main Steven again found himself
standing along the fence, cheering his other JC teammates on. The third main
started off with Turner out front, but an early bobble would end up handing
the race over to Zack Rogers. When the point totals came in Hartson was
again on top, with Rogers second on the podium and Carson Wernimot third.

Pro 4wd modified buggy was by far the fastest class of the weekend.
JConcepts Barcodes were the tire of choice by most of the drivers in the
class. The first round of qualifying saw a new face on top as Zack Rogers
put down a blistering run that would hold up for the round. As in the 2wd
mod class Steven Hartson was able to gain his composure and take both the
second and third round of qualifying. Hartson now had one goal in mind, and
that was to take home all three class wins. With his Associated B44 sitting
in the first box on the grid, Hartson was untouched in the first main. As
the second A main stated Steven was 6 minutes away from the perfect weekend.
He not only captured the win in the second main, Steven also turned the
fastest lap of the entire weekend and ended up with yet another class
victory. Zack Rogers would go on to lead every lap of the third main, and
insure himself another 2nd place overall finish.

In the Open 2wd and 4wd buggy classes it was the Jimmy Barnett show. Jimmy
TQed every round of qualifying in both 2wd and 4wd buggy using JConcepts
Barcodes. Jimmy would then go on to win the first two A mains in both
classes, giving them the overall title in Open 2wd buggy and Open 4wd Buggy. 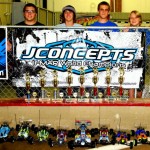 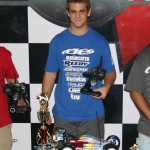 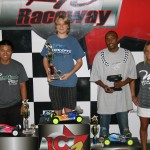 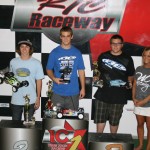 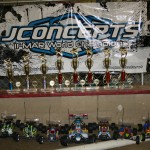 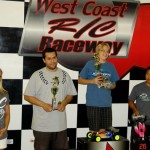