It was definitely a weekend to remember participating in the RC Monster Jam World Finals in Orlando, Florida. The now annual event was organized and put on by RC enthusiasts as a showcase to 1000’s of fans and spectators during the pit party at the Monster Jam World Finals. The RC arena was built with attendance in mind with ample space to operate the vehicles while also offering great audience viewing areas and space for some social engagement and 1 on 1 time with guests. The team met a lot of new fans, racers and fellow competitors which is something that always sticks out as a success. There is a lot of teamwork behind the scenes from Bari Musawwir, John Schultz, Eric Krush, Brad Pitt, Jamie Grund, Mike Eaton, Katie Eaton, Tad Goad and Clyde Delisle to make this event happen and a great amount of appreciation goes out to them. Wood obstacles which were painted and scaled to the actual items, with a solid dirt base packed and watered looked just like what was used inside Camping World Stadium. The track layout and overall flow worked like a charm and gave the competitors the real vibe of Monster Truck competition. It was special to meet many of the new generation Monster Jam drivers, fans and mechanics and also a chance to bump into many of the original drivers and Icons. The cross-over interest from 1:1 to 1:10th was always apparent and as long as it had tires, wheels and a body, the energy is always the same. As all the drivers gathered to gossip, there was a common interest, everyone loved big trucks and on and off the track, the camaraderie was excellent.

Check out our recap video highlighting the RC action, the 1:1 Pit Party and a walk through the Monster Energy pits with Coty Saucier.

During Friday’s competition on the RC track, the Showdown qualifying was exciting. Getting to run each lane and being able to witness what each truck had with each pass, kept the crowd interested. Jason Ruona raced a ZRP Clod Buster with Monster Energy body and after some input from 1:1 driver Coty Saucier, we were able to complete the stance of a great truck. Ruona was able to TQ the Showdown bracket and won a first round race, however, was eliminated before the Showdown finals and the Monster Energy truck was on the “trailer.” Top drivers John Schultz and Trevor Adamo faced off in the finals and Trevor moved his truck “Overboard” into the main bracket featuring the 24 fastest trucks. The main bracket was busy, starting gate managers Jamie Grund and Brad Pitt kept a tight ship in the staging area lining up the trucks to keep a smooth flow to the event. Drivers raced a very competitive bracket and Jason Ruona faced off against Sonny Santucci in the final round. A fast start by Ruona coming down the drop-off opened things up for the Florida native on the straight-away. The Grave Digger replica turned into the big turn with a smooth arc and never looked back over the jump for the Friday racing championship. JConcepts teammate Sonny Santucci crossed the finish in 2nd place completing the 1-2 finish for the Monster Truck duo utilizing the Renegades tires (#3168-01), Tribute wheels (#3377S) and JConcepts bodies (#0334 and #0372).

The Speedster event was next in the schedule with each driver using an outfitted JConcepts, T2 UTV body (#0353) to make the vehicles stand-out just as is used in the 1:1 Monster Jam program. As practice started on the modified track layout, the dirt began to get very dry allowing the Subcultures tire (#3042-02) to hook into the sandy Florida dirt. Ruona took advantage of the extra traction and speed and roped in 2 straight Speedster victories with his Slash 4×4 rig leading to a 1 on 1 match-up in the finals against Kevin Hetmanski. The two drivers exchanged the lead several times on the 2-lap main event but Ruona came out with the victory. The highly anticipated Freestyle show was electric as many drivers breaking their trucks to the thrill of the fans. Gerardo Gonzalez had the cleanest run of freestyle, a perfect run which filled the clock completely without breakage. The crowd awarded him a near perfect score and while several other freestyle favorites had their chance, it was all Gerardo during Friday’s competition.

Once freestyle was complete, the RC Monster Truck group made their way into Camping World Stadium to watch World Finals XX racing and 2-wheel skills competition. Early on, Lindsey Read, driving the Scooby Doo truck, earned herself a spot in the main field, mastering the tricky turn at the end of the straight-away in the process. The dust settled inside the stadium and the 2-wheel skills competition kicked off and Tom Meents would not be denied a 12th World Monster Jam title while he rode a two-wheel up the main jump face displaying an incredible balancing act.

Racing was very competitive as all drivers having a difficult time with the turn at the end of the straight. Between traction rolls, pushing off the racing line or spin-outs, drivers searched for the winning combination through the bracket races. Bari Musawiir driving the Zombie had the track dialed in, he made pass after pass with great turns and clean driving down the main straight. Also, veteran racer, Jimmy Creton in the Bounty Hunter truck was quietly having one of his best World Finals ever, reaching the finals to run against local favorite Musawiir.

The finals started with Musawiir barely making the call after a crash in the semi-finals that nearly put the truck out of commission. A smoking Zombie pulled to the starting line to face the focused Creton, as the racing lights fell, it appeared that Bari had made a perfect start and the much better racing pass. Zombie crossed the finals an apparent winner on the track. After further review, it appeared the truck had rolled back slightly on the staging beam and was given a red-light, much to the depressing moan of the crowd. Creten was declared the winner and after all his experience, hard-work and racing success, he finally was able to be a Monster Jam World Finals Champion. Be sure to check MonsterJam.com for your local TV listing to see the broadcast.

Back on the RC track for Saturday morning it was Sonny Santucci taking the Showdown bracket and moving another truck into the main bracket to give himself a solid championship hope with 3 trucks in the field. During the main field competition, the staging was once again superb thanks to the organization and the bracket racing when quickly. Truck advancements from Shultz, Ruona, Santucci and Adamo narrowed the field into the final 8 drivers. Santucci maintained his winning ways getting 2 trucks into the final 4 with Ruona and Shultz also getting in to the elite field. Jason Ruona was able to eliminate Jonathan Shultz in the Semi-Final and Sonny Santucci eliminated Trevor Adamo in the other semi-final to setup another Ruona vs. Santucci final round. Ruona was able to cut another good light and maintained incredible speed down the ramp for a great run at the final turn. Sonny made a valiant effort in the turn to swing the truck around but Ruona was already squared up and ready to take on the finish line in a stylish finish. In celebration, a small freestyle routine by Grandma Grave Digger made for a pleased crowd on Saturday afternoon. After a small break, it was time for the Speedster race, and after all the excitement on Friday, we had new competitors joining the mix. Another 2 solid rounds of 4 lap racing had Ruona and Hetmanski again starting out front in the 4 lap semi-final race. After knocking out 6 competitors, Hetmanski and Ruona faced off in another solid 2 lap dash in the main event. As the crowd counted down for the start, Ruona grabbed the fast start and never looked back. This time, with the crowd behind the big air jumping Slash 4×4 with Grave Digger inspired body, Ruona took his 2nd win of the day. A “Saturday Special” event featured the high-jump, each truck was given a rolling start toward a main track feature for their best launch of the day. Brandon Scott driving his Warpath based Axial nailed the jump with thrilling air earning the top spot. Many drivers gave it their all but either a broken truck, misguided launch or slippery take-off did not suffice to take Brandon off the top run of the day. Easily one of the more popular events of the day, the high-jump is sure to be back for the 2020 event already scheduled to back in Orlando, Florida.

Freestyle was next and the drivers were ready for their final performance of the weekend. Another great run by Gerardo Gonzalez put him up-front once again to lead the field, however, there was more competition in today’s field. Tad Goad, Dan Wyatt and Fred “Freestyle” Reep all had runs that could have been winning runs, but the fans spoke and Gerardo was once again crowned the champion in freestyle. The RC crew was not finished, an encore using the Ford 1951 panel truck body, painted to spell-out Orlando to the crowd made their way around the track arena. Fred Reep was able to mix in a show-stopping encore run with his World Finals Orlando XX wrapped body. The JConcepts converted Slash 4×4 was once again able to pull off the highest jumps, best tricks and do so while maintaining speed and incredible durability. The crowd approved, the RC crew had done their job providing another avenue for fans in the pit party to enjoy World Finals XX.

As the RC crew, fans and spectators moved into Camping World Stadium for the “big show,” it was a new night of competition featuring the high-jump. Cynthia Gauthier in “Monster Mutt Ice” was in charge of the high-jump and after a stage and burn-out into the ramp, she sent the truck air-born for the top flight of the night. A set distance between the trucks front tires and the ramp made things equal, however, forward drive, throttle timing became the important tasks in the perfect jump. Cynthia definitely “sent it.”

The highlight of the World Finals is always freestyle, between Grave Digger, Max-D and SonUva Digger, the competition is really stacked and its difficult to stand out from the field. On this day, Lindsey Read scored the highest, on a single move she launched the truck, went up for a pirouette and back into the throttle for a hair-raising run. The fans approved and provided her the high-score of the event. Even with all of Todd LeDuc’s amazing leaps, the Andersons’ laying down great routines and Randy Brown sending Grave Digger into a huge nose-dive all for the fans, Lindsey prevailed.

To close, what an experience for the JConcepts team, we look forward to 2020 when the monsters return to The City Beautiful for XXI. 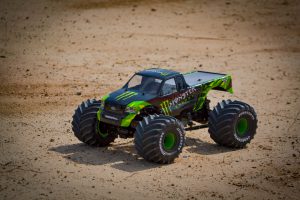 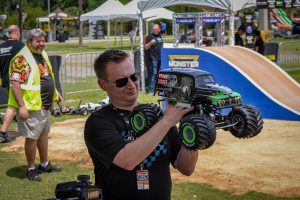 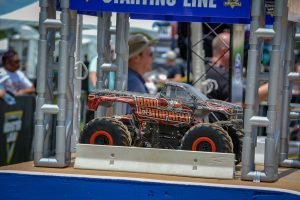 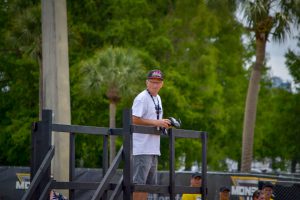 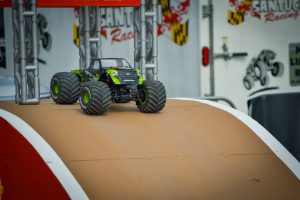 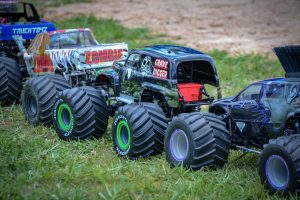 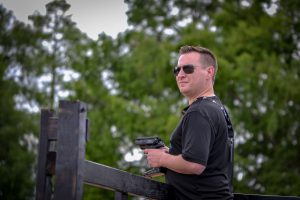 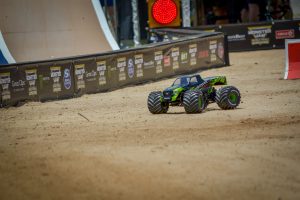 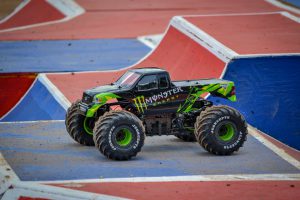 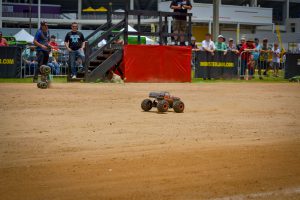 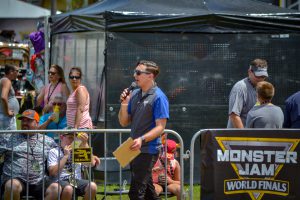 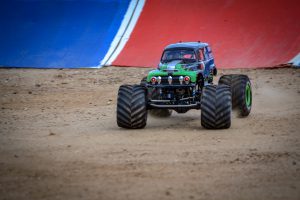 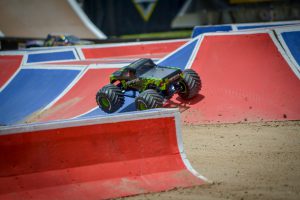 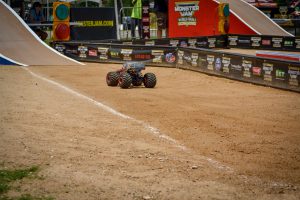 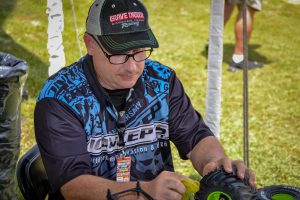 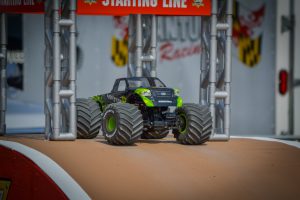 More photos can be seen on our Facebook page HERE.