ROAR Region 12 has always been a hot bed for some of the best racers in the world.   For 2011,  the prestigious Region 12 event was held at the world famous West Coast R/C Raceway in La Mirada, CA.   In what many consider a small warm-up for the Reedy Race of Champions coming in late January, the best racers packed the facility for a weekend battle.

JConcepts / Team Associated driver Steven Hartson quickly rose to the top of the field in the 2wd, 4wd and SCT modified classes taking the early and late TQ runs.    Josh Numan also continued a strong pace during qualifying taking several 2nd round finishes and took 2 TQs during qualifying, placing himself 2nd on the grid.

During the main events Steven Hartson was on a mission.   Taking A-main #1 and #2 in both the 2wd modified and 4wd modified classes, Steven put the events away early to concentrate on his last race of the day, the SCT modified A-main.    Finishing a strong 2nd place overall in 2wd and 4wd modified, Josh Numan also relied heavily on his JConcepts / Team Associated combination all weekend.

The SCT modified single A-main was set and the vehicles were gridded and ready for the tone.   As he had displayed his prowess all weekend,  it was no surprise as Steven took the easy wire to wire victory with his JConcepts equipped SC10 Factory Team making it 3 titles in a single weekend.   Bar Codes in gold compound mounted on Hazard +3mm off-set wheels provided the grip on the West Coast surface.  Topping off Hartson’s winning ride was the JConcepts Ford Raptor OSFM X-Flow body.

Congratulations to all the winners and thank you to West Coast R/C Raceway on another fantastic event. 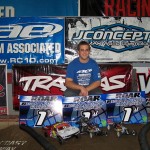 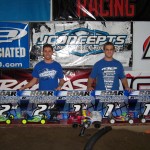