The JConcepts racing team made their way to West Monroe, Louisiana to participate in the 1st Annual Southern Nationals. After a lengthy drive from Florida the crew arrived and settled in to find a fantastic race turnout of 260 entries and a dynamite facility with specifically constructed indoor track built in and on the floor of the Ike Hamilton Convention Center. A smooth technical layout was built which included a large ~30’ table top jump near the grand stands and a compliment of double and triple jumps throughout. The race management crew decided to leave the track alone with very little maintenance throughout the day which made for a slightly bumpy surface. Drivers were forced to learn and develop the best driving lines via experience and trial and error during the qualifiers.

The 1/8th E-buggy class was one of the most popular classes offered and proved to be one of the most competitive. David Joor, Quincy Hughes, Ryan Lopez and Jason Ruona each took a turn running their best in qualifying with Ruona coming out on top in the 3rd and final round of qualifying. A 3-way tie was decided by a slim 1 second after combined times and qual. points were tabulated placing Ruona out front for the triple A-main events.

In the Modified Short Course class, Ruona had his sights set on victory from early on. With a fresh Factory Team SC10 loaded with JConcepts Goose Bumps, Rulux wheels and topped off with a Manta body, the truck was on rails. Taking each of the first 2 rounds of qualifying Ruona experimented in round 3 by mounting up a fresh set of the new SC Double Dees for a dryer and harder condition. Double Dees were on target, taming the increasingly loose / rough conditions with another TQ.

Saturday night, several main events were set to be run, including the Modified Short Course A-main. With a slightly cooler temperature and well defined racing line, Ruona took to the track with SCT Double Dees and took off from the Pole Position in style. A slight battle heated up in the first few turns with Texas driver Mike Battaile getting the worst of things and had to play catch-up. With Ruona out front cruising, the battle was taking place 2nd-10th and Battalie emerged running quickly. Ruona, taking things conservative was not jumping the double that was his specialty in qualifying but still able to increase the lead during the middle of the race. Finishing off the last several laps in traffic with no issues, Ruona crossed the finish line taking the victory in the 10 minute feature Short Course event. The winning SC10 Factory Team, topped off with Manta body, running on Double Dees front and rear tires mounted on Rulux wheels was a lethal combination all weekend.

Early Sunday morning came quickly and so did the 10 minute A-Main # 1 in the 1/8th electric class. Drivers were immediately greeted by a colder track surface which had gotten rougher when compared to the last-time this group had been on the track so many mistakes were made in the opening few laps. Driving from the pole position, Ruona held the lead the entire main and was able to cruise the last several minutes while conserving equipment and run-time and feeling out the new conditions.

A-2 was up early in the afternoon and the conditions had now stabilized. With a fresh set of Green compound Double Dees V2, Ruona took the lead straight from the Pole Position and pushed early. Turning a quick 32.7 lap-time, a comfortable lead between 1st and 2nd grew by the 5-6 minute mark. With some encouragement and direction from the near-by pit-crew, Ruona slowed the pace at the end, singling a tricky jump section and maintained a 6 second lead and cruised in for the win, taking the overall championship. A-main # 3 was a tight battle between David Joor and Ryan Lopez with Joor coming out on top. Ruona’s winning RC8B-e was decked out with JConcepts all weekend. Settling on the Double Dees V2 in green compound proved to be the important choice of the weekend. Hi-Flow body, Illuzion – HD rear wing and Mono wheels finished off the vehicle. 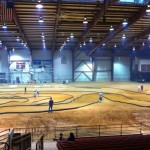 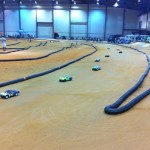 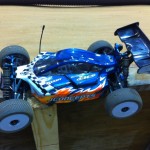 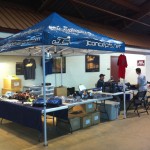 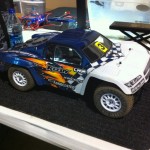 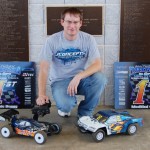 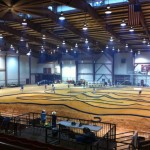