The 4th and final round of the 2011 JConcepts Indoor National Series was hosted by R/C Excitement in Fitchburg, MA. 296 entries showed up to make the last stop on the first nationwide series a smashing success. Drivers from 17 different states showed up to compete in now what is considered a can’t miss Northeastern event. National points leaders going into the event, Brent Thielke, Josh Numan and Tanner Denney once again made the trip across the United States to compete for the first ever title. ROAR National Champion, TLR’s Dustin Evans made the trip to the 4th and final round to spread the knowledge and compete against some of the best the Northeast has to offer.

Friday morning, racers were greeted by a friendly R/C Excitement staff and fully prepared track and broken-in surface which made tire choice and driving lines easier for racers coming in from out-of-town. Racers quickly gravitated toward JConcepts blue compound and in particular the Bar Codes tread pattern for the best traction. During check-in and registration drivers were given 2 race t-shirts with their entry and complete access to the track for as much practice as possible prior to Saturday’s qualifying. Saturday morning began with TLR’s Dustin Evans putting down several TQ runs in the 2wd modified class, 2wd Racing Truck class and 2wd modified SCT class. Dustin chose the Bar Codes in blue compound on the 2wd buggy and 2wd Racing Truck class to blister the field. Brent Thielke and Mike Gay consistently put in the quickest runs in the 4wd modified class also utilizing the Bar Codes in green compound. Mark Smyka put down a TQ run in the 17.5 stock buggy class while Kevin McDaniel TQ’ed the 17.5 stock SCT class. David Savaria moved to the top of the field in the 17.5 stock truck class by TQing with the only 15 lap run. Anthony Mazzara TQ’ed the SCT 4×4 and 1/8th E-buggy classes with the only 18 lap run in each class. Timing and scoring setup the mains and drivers packed the boards to view the main event standings. 8 minute A-mains were posted and lined at the bottom of the heat sheet with the 2wd modified A-main set as the last main event of the day, race 30. Throughout the day racers battled getting into bump-up position trying to secure a spot in that elusive A-main. Track conditions stayed extremely stable throughout the day courtesy of the friendly staff and track crew. The spectators began lining the track for the B-main events and the scramble was on to see who would get the bump-up position in each main. Exciting finishes and last-lap heroics were standard and the winning drivers retreated to the pit area for A-main preparations.

The A-mains started with the SCT 4×4 class getting underway. TQ driver Anthony Mazzara got a relatively clean start and pulled out all the stops to a secure a nice cushion out front. Andrew Castellini and Mike Gay got a very poor start but made their way toward the front during the mid-point of the race and began challenging the top 3. Andrew made up valuable time and locked into the second position and tried to run down the leader. Anthony was out front maintaining control of the race and negotiating the traffic with precision not allowing Castellini to get any closer. Finishing the 8 minute main Anthony Mazzara took 1st place, Andrew Castellini finished in 2nd and Mike Gay in 3rd.

17.5 stock truck drivers took the starting grid for the 2nd A-main of the day. TQ driver David Savaria didn’t get the start he had hoped for and dropped back into the 5th position. 3rd qualifier Nick Malato got a relatively clean start and pulled into 2nd and then took the lead on the 8th lap. Nick Malato used valuable experience to maintain the lead throughout the rest the race and crossed the finishing line taking 1st place. TQ driver David Savaria finished in 2nd and Steven Semeraro in 3rd. Nick ran the JConcepts Bar Codes in blue compound to take the victory.

The 2wd Racing Truck A-main lined up with TQ Dustin Evans taking the position up front. Dustin took a quick start with his 22-T and looked like he might check out on the competition until a mistake in the 2nd turn on lap 2 gave Brent Thielke the lead with his Associated T4.1. Brent held his own lap after lap until an incident with lap traffic gave Dustin the lead once again. Dustin took command and dropped the hammer taking a huge lead. Coming around for the final lap Dustin Evans took the win followed by Brent Thielke in 2nd and Andrew Castellini in 3rd. All 3 drivers relied on JConcepts Bar Codes in blue compound to power a 1st – 3rd finishing position.

One of the largest classes at the event the 17.5 stock SCT trucks were up next and the crowd once again lined the track. TQ driver and local favorite Kevin McDaniel wasted little time climbing back to the top of the field and taking the lead. Bill Gajowski and Jay Franz battled for the 2nd and 3rd positions while Kevin started to check out on the field. Royce Berrio started slowly but eventually worked his way back up into the field and soon found himself battling for 2nd and 3rd. Royce held an amazing battle with Jay and the 2 drivers were separated by only .5 at the finish line. Kevin McDaniel took the win with Royce Berrio 2nd and Jay Franz 3rd. Kevin utilized the JConcepts combination all weekend running the Bar Codes tires in green compound and Ford Raptor body. Pro 2 SCT Open A-main hit the track next with Dustin Evans, Tanner Denney and Evan Sherman lined up 1-3 on the starting grid. Dustin jumped out to the lead with Tanner hanging on just behind Dustin as they ran through the field. Dustin jumped the quint jump section with ease and Tanner matched lap after lap. A great race heated up between the 2 leaders and Tanner was giving Dustin all he could handle. Going through traffic, Dustin made it through cleanly and Tanner wasn’t quite as lucky. An incident with another vehicle cost Tanner valuable time and gave Dustin the space needed to take home his 2nd victory of the day. Tanner Denney finished in 2nd and the crowd favorite Evan Sherman finished in 3rd.

Anthony Mazzara owned the 1/8th E-buggy class all weekend and he continued to pour it on in the A-main. Anthony got a reasonable start and took the lead on lap 2 which he would never relinquish all the way to the finish line. Taking the 8 minute A-main win, Anthony Mazzara took 1st place, Justin Walts 2nd and Gabriel Galeano 3rd.

The fastest vehicles of the weekend, 4wd modified A-main took the grid. TQ Mike Gay got off to a great start with Brent Thielke just behind in 2nd. Over the quint jump Brent made a great move on the downside of the jump taking the inside line from Mike and getting by him to take the lead. Brent appeared poised in the lead position and wasn’t making any mistakes to allow Mike to close in. At the back of the pack Josh Numan slowly moved his way into contention and moved into 3rd. Brent was out front and cruising, looking to stay clean, Mike Gay made up a little time but it wasn’t enough. Making 30 laps, Brent Thielke took a well deserved win, Mike Gay finished in the 2nd position and Josh Numan in 3rd. The top 6 drivers in this class were running the popular JConcepts blue compound Bar Codes. 1st – 3rd place utilized the B44.1 chassis, JConcepts Finnisher body and Hi-Clearance wing. Mark Smyka pulled into the TQ position to start the 17.5 stock buggy A-main. At the tone Mark got the jump but found himself in some trouble early-on dropping down in position. Jamie Frenier led in the early going until Kevin McDaniel fought through to take the lead. Royce Berrio waited patiently and found some pace throughout the race and gained the lead on lap 16. Royce crossed the finishing taking the win followed by Mark Smyka finished 2nd and Kevin McDaniel 3rd. Royce’s winning B4.1 was outfitted with JConcepts Bar Codes in blue compound front and rear.

The final race of the day, race 30, 2wd modified A-main took to the track. Spectators completely lined the track to get a glimpse of the modified buggy drivers. Dustin Evans once again got off to a great start with a 10-15 foot space between him and Josh Numan who was in 2nd place. 3rd place driver Mike Wilder was running super quick as well but made a mistake coming on the front straight-away allowing Jason Ruona to move into 3rd. The race was on between 3rd – 6th after Ruona made a bobble allowing the entire field to catch-up. Dustin was out front and pushing the lead further while the rest of the field battled. Mike Wilder emerged in 3rd place and maintained a steady gap to Josh Numan in 2nd place. Dustin Evans put on a clinic, crossing the finishing line and taking home his 3rd win of the day. Josh Numan finished in 2nd and Mike Wilder in 3rd. The top 10 drivers all chose JConcepts Bar Codes in either blue or green compound to tame the R/C excitement surface. Dustin Evans winning TLR 22 was glued to the track all weekend using the Bar Code V1 tire in blue compound. A huge thank you goes out to the entire R/C Excitement crew on putting on and promoting a first-class event. Another thank you goes out to JConcepts and Team Associated drivers Brent Thielke, Josh Numan and Tanner Denney on their performances all year long. Stay tuned for the Indoor National Series points standings and final results. 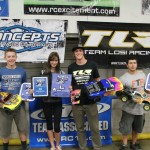 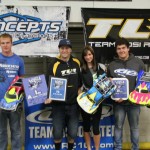 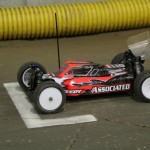 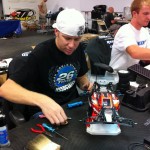 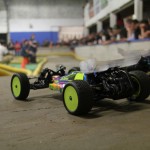 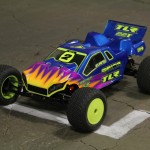 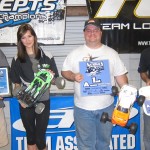 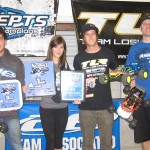 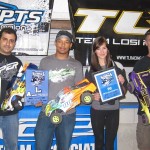 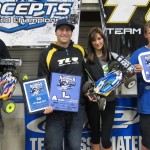 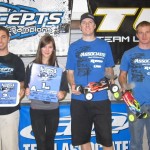 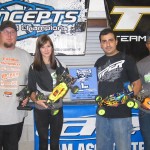 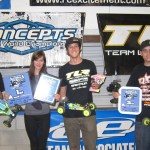 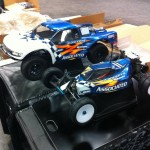 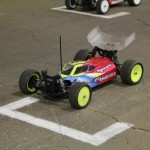 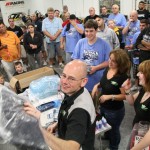 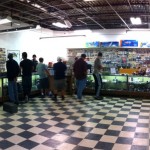 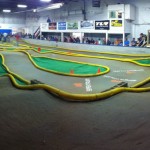 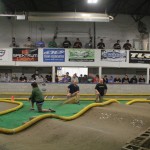 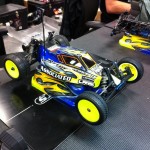