Thailand immediate impressions; We’ve landed at the airport and it is huge, appears new, it’s very nice. The customs line is very long, it took us forever to clear, not sure why, no apparent delays just long and slow. Bathrooms are “American” style, nice. (hey I’m a girl it’s important)

I saw a sign for the Hot Bodies Team, etc listing drivers names, being held nearby the people who were picking us up. I didn’t see a sign with AE but Brent got there before we did.

There are 9 of us with the AE group – it took 3 vans between the 9 of us and our massive amounts of luggage.
The vans technically appear to have seats for 11 (10 + driver, they drive on the other side of the road here by the way) but we only have 5 in my van plus the driver. The van is fairly comfortable and thank god has a/c.

It seems the driver speaks passable English. I think I heard the driver ask Brent if he was ok with the temperature, Brent said yes, nice. The driver I believe said he was cold lol, but they are in the front and my hearing is poor.

It was the same way when Jason and I were in St. Lucia, they only turned in the a/c for us and the locals shivered while we were still warm.

Upon leaving the airport, the sights did not meet my expectations. Busy highways, roads in good condition, new cars, not the lesser conditions I had expected. We have passed some “shacks” small buildings but also some big buildings and billboards that resemble an “American” style.

We just now passed a small street with KFC, Dairy Queen, 7-11, but to the guys dismay the driver didn’t stop. I think the driver has more trips to make to the airport today and may be under a time crunch.
Not much else to see from the highway yet, mostly looks pretty typical.

Just passed a huge house, new style, tile roof, perhaps minimum 750k and up back home (depending on which state) and not far behind it there are a few tiny houses, interesting. Shacks some would say.

There are many large warehouses now visible from the road, we can see a few apartment style buildings too. Sorry photos would be blurry and not too much to see … Yet

I think we have been driving 45 min and it might be time for a Dramamine and some goldfish crackers. 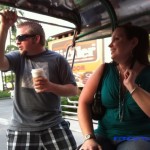 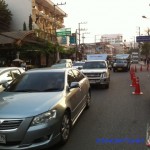 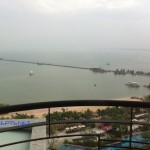 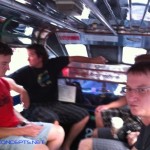