JConcepts sweeps round 1 of the HobbyPlex Summer Series.

Round 1 of the Summer Series had a great showing, 142 racers showed up for a great day of 1/10th Off-Road Racing. The Track is fairly large for 1/10th scale, and the Drivers Stand puts you 15 feet in the air.

Pro 2 was all Alex Vanderbeek, all day. Alex set TQ in the first round by 10 seconds, and was a few tenths faster the second qualifier to start him first on the grid. As the tone went off, he settled into a comfortable pace, and lapped through 3rd on the 20+ second per lap track. At the finish he had the win nearly lapping 2nd place on the last lap. Alex was using the JConcepts Raptor Body, Hazzard +3mm Wheels, Orange Double Dee’s in the front, and Green Double Dee’s in the rear for his Team Associated Factory Team SC10.2.

Mack Vanderbeek started round 1 with a TQ in Mod Truck over TLR Driver and Track Promoter Alex Sturgeon. Mack bettered his TQ in round 2 placing him at the top spot as the A Main tone went off. Mack made a mistake on lap 1, and allowed a few spots to slip away. Within lap 3 Mack was back in 2nd working on the lead. With about 3 minutes down of the 8 minute race, Mack regained the lead and never let it go again. Mack was using the JConcepts Finnisher truck body and Gurney Wing, Blue Pressure Points on the front, and Green Pressure Points on the Rear of his Team Associated Factory Team T4.2.

Mod Buggy would be much more interesting as the day went on. Alex Sturgeon was dialed in early, grabbing TQ. Mack Vanderbeek and Alex Vanderbeek were working on where to find the time needed to make it a race in the Main. Sturgeon was first on the grid, Alex Vanderbeek 2nd, and Mack 3rd. The first lap Sturgeon was able to get away as Alex Vanderbeek shorted a double that collected both Vanderbeek’s. Alex was able to get away maintaining second, as Mack was owned sending him back to 9th. Both Vanderbeeks had a lot of work to do. Sturgeon tried settling into a solid pace, but Alex Vanderbeek was making up ground in a hurry. The 14 year old kept the pressure on, forcing Sturgeon to make an uncharacteristic mistake. Alex Vanderbeek took the lead and drove off. Mack meanwhile was working his way back through the pack. With about a minute left in the race, Mack had caught Sturgeon, and made a move into 2nd. Alex Vanderbeek would go on to win by 12 seconds, and Sturgeon and Mack would battle right up to line, with Mack getting second by a mere tenth of a second. Alex Vanderbeek was using the JConcepts Finnisher Body, 7” High Clearance Wing, Blue Pressure Points on the front, and Green Pressure Points on the Rear of his Team Associated Factory Team B4.2. Mack utilized the exact same setup. Alex Sturgeon was also on Green Bar Codes up front and Green Pressure Points in the Rear, making it a JConcepts Podium Sweep.

Thanks to the entire HobbyPlex crew for an amazing facility to race at. 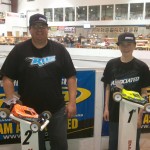 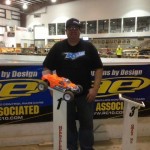 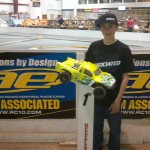