Mike Nelson and Neil Pestka have winning runs at the 2011 Futaba Electric Challenge with JConcepts.

I went to the Futaba Electric Challenge this past weekend held at RJD Hobbies located in Lincoln Illinois. The weekend started with practice all day Friday, and then two separate race days on Saturday and Sunday, your finishing position would be the combination of points for the two days added together.

The first day of racing I TQ’d all three rounds of 2 Wheel Mod SC and went on to win the A-main. As the day went on the track dried up and became extremely loose, in the first round my fast lap was a mid 29 second lap. In the main my fast lap was 36.1, slowed down about 6 seconds a lap!! Started out the day with Double Dees in Green Compound up front and Subcultures in the rear. Finished the day with Double Dees up front and Bar Codes on the rear both in super soft Green Compound. On second day of racing we raced the same layout backwards, the track was extremely dried out with some blue grove and loose dusty sections mixed in. I used Double Dees in Orange Compound up front and Bar Codes in Orange in the rear as the track got hot. By the time we ran the final mains I went back to Double Dees in Green up front and Subcultures in the rear I TQ’d two of the three rounds in 2 wheel mod and ended up with over all TQ for the weekend. Brad Shearer took home the win also running JConcepts tires in the A-main and I came home third for the day and with my win on Saturday I took the overall win for the weekend.

I also raced in Mod 4×4, I qualified 3rd both days, came home with a 4th place finish on Saturday. On Sunday the main was a little rough, the mains were started with the TQ by himself up front and the other 11 drivers in two rows behind TQ. I was punted off the track twice in the first lap, and it really never did get much better, just in the wrong spot at the wrong time all the time! It was just bad enough that the only thing you could do is laugh! I think I made it back to 6th by the end of the main, so for the weekend I ended up 5th overall. I used Double Dees in Orange up front and Bar Codes in Orange on the rear for almost the entire weekend on the 4×4. I also used the JConcepts Ford Raptor body on both trucks all weekend. Neil Pestka wins the Stock Short Course class this past weekend at the Futaba Electric Challenge. Neil was running Double Dees in green compound. Congratulations to Neil for a great run! 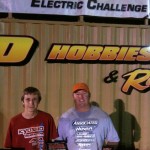 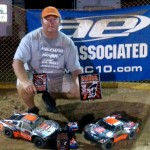 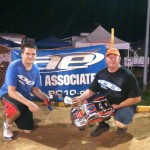 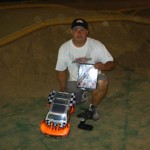