The first weekend of December kicked off the 9th Annual Fall Brawl held at The Badlands R/C Supercross in Myrtle Beach, SC. The 2-day event is beginning to collect drivers from all over the United States. This year’s race had record 187 entries. The track was super smooth blue groove, and with a flowing layout creating very fast lap times. Even with the temperatures in the low 30s, everyone was ready to go racing.

The race of the weekend was the 1/8th Pro Buggy. JConcepts driver Ryan Maifield TQ’d on the all-new JConcepts Hybrid tires in Green compound. Local Travis Dupree would use his knowledge of the track and skill to capture the second qualifying spot on the grid. In the Main event Maifield decided to stick with what was working very well, and run JConcepts Hybrids again. As the race started Dupree jumped out to an early lead, opening up a 12 second gap on the rest of the field. A rough opening segment for Maifield dropped him back to sixth by lap 5. By the 12-minute mark Maifield had caught and passed Dupree. At this point every person at the track was up on the fence watching a great race. For the next several minutes Dupree and Maifield battled for the lead through pit stops and traffic. Just when it seemed Maifield was taking command of the race he wrecked in the rhythm section, flaming out at the end of pit road giving the lead back to Dupree. For the next 10 minutes Maifield showed why he is one of the world’s best. With 2.5 minutes left Maifield caught Dupree but was unable to pull away. Both drivers squeak past the line as the master clocked expired, with Dupree a second behind Maifield. With a half a lap to go and Maifield trying to stretch a 10-minute run out of his buggy, his slowed running out of gas. Giving the lead back to Dupree. Coming out of the last turn Dupree’s car would also run out of gas, but quietly roll past the finish line to the cheers of the fans. Privateer and The Badlands Track Manager Kevin Bullock took home 3rd place. JConcepts Barry Pettit finished 4th and Jason Schreffler rounded out the top 5.

In 1/8th scale Truggy, JConcepts Ryan Maifield used his favorite JConcepts truggy tire Crosshairs (blue) to take his second TQ of the event. Unlike buggy this time Maifield would use his number one starting spot to jump out to an early lead and pull away from the field. Team Losi driver Travis Dupree would try to stay on pace with Maifield, but wouldn’t have the consistency to stay with Maifield over the thirty minute main. By the end Maifield would end up with over a lap on the field, and cruise to a victory. Dupree would end with second, and Barry Pettit would round out the podium. 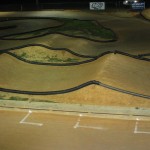 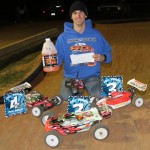 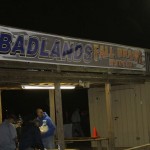