Long day today. I spent the time early in the morning putting together our SCT team for the race tomorrow. Although 3 of our guys are first timer SCT drivers I’m excited to see how it turns out. We broke out another new SCT tire today, the Subcultures. They are hot!

We have the new tires available in the hobby shop so many guys are stocking up on the new stuff while they have the opportunity. I think we’ll be running the DD’s tomorrow. Lee Martin’s SCT is ready to roll now with a wrap courtesy BC1 graphics. Jake Thayer is ready along with Kody Numedahl and Ronnie Gardner. It’s going to be the veterans vs. the youth.

Another new item we brought out are the new Tense wheels for SCT. These are direct bolt on for the Slash 4×4 and will come with 2 wheel caps. Dialed!

The normal suspects seem to be the pace setters. I thought Maifields 2wd was his best vehicle. His truck was also good but he didn’t run it near as much. 4wd was rocking as well running in the high 19’s and low 20’s for lap times. Fast lap times are ok. Throw a blanket over them.

The recent improvements to the track and hobby shop are very nice. Very nice facility and operation. Keoni and crew appears to be doing a fantastic job.

A unique twist this year is Lee Martin running the Tamiya 4wd and 2wd. Yes, Tamiya has a 2wd and it looks really nice. No photos are supposed to be taken but I’m going to sneak something tomorrow.

A very large Losi team has arrived, bigger than years past. Maybe this signals a re-birth of their 1/10th program? I spent sometime in the Losi pits with Frank Root and everyone was wrenching hard, mounting tires…etc. I wouldn’t be surprised to see 4-5 Losi vehicles in the mains in mod.

Team Yokomo is not in attendance nor Hot Bodies. Travis Amezcua is not here for probably the 1st time in years.

Maybe I should have raced? There is some room in those mains now.

Zack is pitting with Xfactory so I spent some time there as well. Kinwalds buggy looks cool as usual. I haven’t watched him on the track but Paul claims he looks super aggressive and should be a factor. I wouldn’t be suprised to see him in the thick of it. He used to dominate this race in the 90’s and early 2000’s.

We have to give some shoutouts to Zack being at Cactus for the first time and being 13 years old. He’s running 3 classes and handling everything himself. Wrenching, race check-in, technical inspection, tee-time practice sessions. The only help he needs is getting his race stuff to and from the pits. Impressive stuff.

We have a couple new vehicle mods floating around in the pits and I’ll try and shoot those tomorrow.

No Scott Brown at Cactus = no fun. We need a nightlife leader. Where are you Scott?

Boston Market is just not as good as Michigan Ave.

Zack and I are at dinner now so it’s time to pack it up for the day. This dinner has taken so long I feel like I’m on a cruise for one of those dress-up dinners. What’s in your back pack? 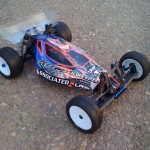 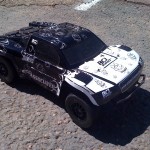 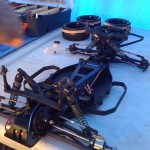 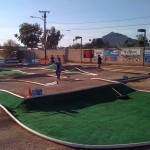 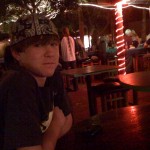