6:00am and we are up once again and ready to go. We were out of the parking lot before 7. Pretty impressive.

We arrived to the track after a stop at McDonalds. Zack picked up his customary 3 hash browns and orange juice.

When we arrived at the track, Maifield and others were already getting ready and mounting tires. These guys mean business. “Mans” had an opportunity to TQ mod truck and 4wd while Cavalieri looked too comfortable on top in 2wd modified.

Mod truck was up first and a mistake by Mans put Tebo in the lead in the A qualifier and he finished off a great run. Both drivers on blue Bar Codes at this point in round 3, early morning.

Round 3 of 4wd mod was an opportunity for Maifield to lock-up TQ. Cavalieri had other plans however as a brilliant “Pudge run” had everyone stunned. Mans suffered a broken axle pin on the front CVA, it had 4wd, but barely. He would have to wait until round 4.

SCT round 3 time and the group was ready to go. We experimented with inserts in the new DD tires as we have already been switching between our Profiled 1/8th buggy inserts and the new molded SCT insert. Kody layed it down in round 3 and set the new TQ in SCT. Mark Pavidis would finish second and he looked to be getting his SCT figured out. Mark even mounted and prepped an all black Truth body and mounted it to his Kyosho truck. It looked good. Ronnie Gardener, Lee Martin and the other team members ran a good race and also finished in the top 5.
Kody had an edge for TQ with his finishes at this point.

2wd modified round 3 had Pudge again out front with Tebo and others in tow. Mans again broke out of the race. Tebo took over TQ right at the end and edged out Brian Kinwald from the B qualifier. With Maifield only having a 4th from round 1 of 2wd he needed a great round 4 to make the final. Pressure cooker!

During the break I went and picked up some Wendy’s from across the street. It must have taken 7-8 minutes and my parking spot was already stolen. What’s up with that?

I went back to work mounting tires and wrenching on SCT trucks for round 2. Maifield was comfortable with his tire selections but I was eager to try some things.

We had an epic battle for TQ in modified truck in round 4. Tebo vs. Maifield had the track surrounded in the A-qualifier. Back and forth they battled for the lead as Mans looked conservative at first but then turned it on mid race. Just as Mans took the lead he hung a pipe coming off the straight which locked it up for Tebo. Mans would have to settle for 2nd on the grid.

By now its mid afternoon… I was thinking we should take a little opportunity for Maifield to try some Losi rear tires on his 4wd for a test in round 4, get a true test of Losi tires against our Bar Codes. This is the most critical moment of the day when the track is hot, roughly 92-95 degrees and the surface is polished looking. Tanner Denney and I had Bar Codes in hand to make a change if necessary. As he took several warm-up laps I wasn’t sure it was the correct move. I wanted to change before the round 4 qualifier got underway but he pulled in for a ride height adjustment with Brent instead.

He scrubbed them a little more on the grooved track and he was off. Cav took the early lead but him and Mans were only tenths apart on the clock and pulling away from everyone else. Mans took the lead on a bobble by Pudge and he looked in control. Just then he broke it loose on the straight and rail slid the inside pipe having to adjust just enough that Cav took over race lead. They finished first and second but it wasn’t Mans best looking run when compared to his 2 previous TQ’s from the day earlier. Pudge TQ’s 4wd mod by .8 tenths of a second after combined times. After the race Mans agrees he should have made the tire switch instead of ride height.

Round 4 of 2wd was the pressure cooker race as Mans was not yet in the final because of a couple broken runs. The track was cool now and we were racing under the lights. The buggies seemed so fast and had quite a bit of traction.

Pudge again jumped to the front and Tebo and Mans were also flying. Maifield was being careful because he still needed a good run to qualify. Mans got tied up with Frank Root and then made a small mistake on his own which dropped him to 3rd in the race. Race over! Cav TQ’s, Tebo in second and Mans third. Maifield qualifies 5th overall.

Zack made the A-main in the 2wd stock class and B-main in stock truck. He finished in the C-main in SCT. Nice results for being his first Cactus race.

We are wrapping it up Saturday night and Zack wants to go to Outback. No problem, we met the rest of the X-Factory guys at Outback for dinner. One of the topics of conversation was about a brilliant last 2 rounds by Brian Kinwald to qualify 6th overall in 2wd mod. His round 3 was a second overall only tenth’s behind Tebo. He still has it folks. When his equipment is right and he runs the correct tires, he’s right in the thick of things. His buggy looked good too. Nice and stable smooth run.

Time for bed, mains are tomorrow. 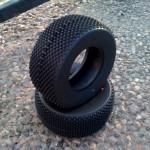 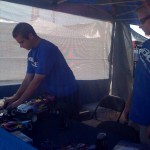 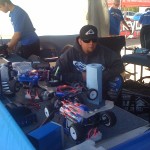 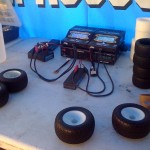 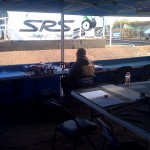