Enid R/C Speedway once again held the Bigfoot Off-road race with a record number of entries this year – with 214 entries. Track opened at 6 p.m. on Thursday night for a club race with only an hour of practice before the races. Friday would be practice 12-9 p.m. with controlled practice starting a couple hours into practice due to the large number of racers arriving throughout the day. The Enid crew did an excellent job with practice and getting the races run with the large turnout. Track was a high-bite grooved clay track with lots of traction.

Saturday qualifying saw 28 heat races stacked up to 10 vehicles max in a heat. 16 hours of racing began at 9:30 a.m. and ended at 2:30 a.m. with a resort after 2 rounds. The race director kept the track closed between heats to check in and line up for IFMAR qualifying so there would be no hot laps during qualifying.

Round 1 2WD Mod and 4WD Mod went to JConcepts Team Driver Cody Jandrakovic with his RC10B4 and B44, which would be Cody’s only TQ round in 2WD, but he TQ’ed rounds 3 and 4 in 4WD for the overall TQ in the 4WD Mod class and a second qualifying position in 2WD Mod and a fifth qualifying position in Truck Mod. JConcepts Gold Barcodes were Cody’s choice for tires all around on all vehicles. JConcepts Barcodes were the majority tire choice at the event.

Sunday’s mains would begin an hour later due to the late night of qualifying. 2WD Mod A1 saw second qualifier Cody Jandrakovic take the lead on lap one with a bobble from the TQ – then never looked back, with a clean run taking A1. A2 saw a great battle early on but a mistake by the leader allowed Cody to get by for the lead and stretch out to take the win in A2 and the overall in 2WD Modified.

4wd Mod A1 would see Cody Jandrakovic bobble in the quads on lap 1 and drop to 4th but would retake the lead by lap 4 and win A1. A2 would be the best 4wd time of the weekend with Cody leading from start to finish and getting the overall win in 4wd Mod. JConcepts Gold Barcodes all around with the fastest lap times and race time.

Truck Mod was a battle to the end between Team Associated/JConcepts driver Cody Jandrakovic and Team Kyosho/JConcepts driver Cody Hollis. A1 saw Cody Jandrakovic move through the field from fifth to finish second behind Cody Hollis by 0.79 of a second. A2 saw both Codys with problems early to finish third and fourth. There was a four-way battle for the overall win going into A3. A3 saw Cody Jandrakovic move through the field early into second behind Hollis. A couple laps later Hollis got sideways in the sweeper, allowing Jandrakovic to go by for the lead and the win in A3. So we go to the tiebreaker with both Codys having a win and a second. JConcepts takes the sweep in all three modified classes with Cody Jandrakovic running Gold Barcodes all around on all 3 vehicles. 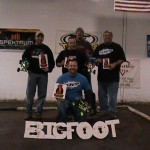 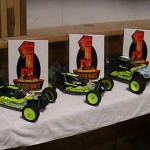 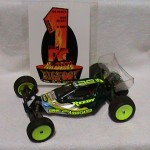 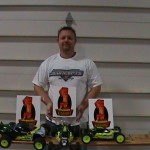