I made my way to Ottawa Canada for the 4th annual Canadian International Championships held at Sutton Aviation Raceway. The owner Billy Sutton has an aviation repair service located on a regional airfield. Next to his hanger is the location of the RC track. In the past years I have seen photos of the complex, so I had a good idea of what I was in for. But in reality, it exceeded my expectations. A very unique venue would be an understatement. The track is located under a large tent. As in small Circus size tent. Not a rental, Sutton purchased the tent to cover the track the entire summer months of the race season for his weekly club races along with the Saturday event and a Sunday open practice for new drivers, which is proving to be a successful program. When the long winter and snow cover comes, he removes the tent cover and starts off the next Spring with a fresh layout and another racing season.

The track is a good size for 1/10th. Approximately 140 x 60 with a good amount of elevation changes makes for a fun track and a challenge for the drivers on hand. This year’s layout had some technical sections that would ruin your laptime with a mistake. So being fast and consistent for the entire 5 minutes would be key for a good run. Pitting was another pleasure. Located track side inside the hangar, tables, chairs, and power were there for all. With clean concrete floors, a nice atmosphere and friendly racers, kept the building a buzz with bench racing stories and what changes to make for a better run. Throw in the fact that it was about 30% French definitely gave it an International feel.

The Unique Canadian format was a change from the norm. All 2Wheel vehicles were ran first. Buggy, Stadium Truck and SCT. Starting on Friday evening with 2 rounds and finishing the next 2 rounds in the morning. Then it was on to the 4Wheel classes of buggy SCT and 1/8th. With the focus on only one car at a time was a change of pace from other programs. The last few races of round 4 was finished up on Sunday morning and it was main event time. Only 1 bump was allowed into the A main, so the B mains were ran first to allow time for preparation for the Triple A’s. All lower mains had 2 bumps with a locked in 8 car field. Again with the 2Wheel divisions running first. A Canadian twist to the Triple A format, the second A main will be an inverted starting grid, almost eliminating the common A1, A2 win scenario.

2Wheel Buggy had TQ Damian Lamy from Canada on the poll followed by Washington’s Michael Schoettler both on JConcepts Bar Codes in Green compound. At the tone the train followed for a few laps, then a mistake by Lamy gave the lead to Schoettler who took the win. A2 with the invert had Schoettler and Lamy in tandem working their way through the field. At the mid way point the two had made it to the front, this time Schoettler making the mistake giving the young Canadain the lead from the number 10 starting spot. Calm and cool he closed out the deal with the win and applause from the crowd on a job well done.

Going into A3 all eyes were at the front to see who would take the overall. With an early bobble from Schoettler Damian Lamy took control with a wire to wire win, and the class championship followed by Alex Miller with two strong 2nds and Michael Schoettler with the final step on the podium.

Truck had Michael Schoettler on the poll with Damian Lamy in 2nd. This time Schoettler wasn’t going to give up the chance, and after a good battle in A1 with Schoettler getting the win. In A2 the two worked their way up from the back of the grid and into the lead early with Schoettler never looking back for the class victory followed by Lamy. JConcepts with the 2nd class win.

SCT had TQ John Walentia from Washington with his JConcepts equipped SC10 on point. Winning A1 and A3 to take the Championship over a spirited battle with Toddie Anderson from Massachusetts.

4Wheel Buggy had Canadian Damian Lamy back in action, and back on pole. With a huge lead in A1 an issue dropped Damian out of the race. With the pressure on, the youngster laid down 2 strong runs to take the class win, and the 4th for JConcepts.

Pro 4 had TQ Matt Olsen from California with his MIP/JConcepts truck set on kill. With strong runs and patience through traffic, Olson was able to seal the deal and take the top step.

With 346 entries and racers from all around North America, this event is a great one to attend. The Sutton Raceway crew ran a perfect program and the facility is top notch. Friendly people and a great atmosphere make this an amazing event to attend.

Thanks go out to all of the racers who made this a great weekend. The host and crew for a great event. And for all of the fun that was had by all. Even if my French was rusty…or non existent. 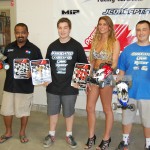 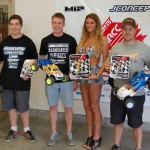 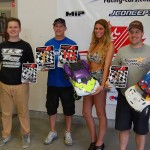 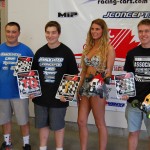 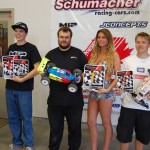 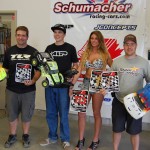