Daniel’s cars were hooked up utilizing Dirt Web tires, Dirt Tech inserts, Mono wheels, and Finisher bodies. Daniel TQ’d 3 out of 4 rounds of qualifying, having a DNF in the final round. Despite the DNF, Daniel positioned himself as TQ in both classes heading into the mains. 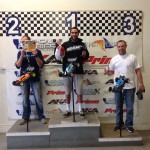 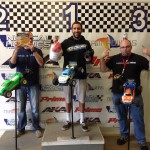 In the 2wd main, Daniel got a great start and by the second lap was able to break away from the field and dominate the main, maintaining a sizable gap throughout. In Modified Stadium Truck Daniel got a good start as well but this time was followed closely by local fast guy Peter Stein. At the half way point Daniel was able to break away from Stein and cruise to his second victory of the weekend!