The Surf City Classic in Huntington Beach, CA, has evolved to a can’t miss event on the Southern California racing scene. OCRC Raceway presents one of the best locations for indoor racing in the world but also maintains a relaxed atmosphere. JConcepts was once again on-hand to support the product and drivers for the 2015 edition of the event. With reigning ROAR national champion Ryan Cavalieri and defending 2014 Surf City winner in attendance, the event was set for a classic battle. 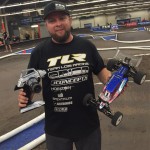 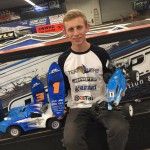 Qualifying started and finished with Ryan Maifield taking the TQ in 4wd and 2wd modified classes while Kyle Layton showed his dominance in the 17.5 buggy class by taking pole position for the all important Sunday main events. Ryan Cavalieri, Dakotah Phend, Rob Gillespie, Spencer Rivkin, Steven Hartson and Kevin Motter all looked sharp but would have to take positions behind the defending champ in the modified classes.

With a single A-main program there was quite a long break for the A-main drivers while their races were scheduled to take place during the end of the program. The top dogs used this time wisely to watch the track and relative speed to determine tire and vehicle preparations heading into the 10 minute mains. The ace drivers at the event took to the track and performed several warmup laps just before the start tone.

Nick Black raised the flag on the event and Maifield and Cavalieri were off like bandits to start the 4wd final. It was Maifield’s race early until he was forced to check up for a crashed car allowing Cavalieri to take the lead. The Ryan and Ryan show pulled away from the field with an impressive show of speed for at least 4 minutes of error free driving. Spencer Rivkin recovered after a poor start and moved into 3rd and looked to settle in there while the Ryan’s battled for the lead. A unforeseen issue with Maifield’s car with 3 laps to go caused him to drop out of the race and Spencer gained a position. Cavalieri held the lead to the finish taking victory while Rivkin finished a well deserved 2nd and Rob Gillespie finished in 3rd. 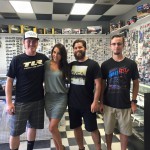 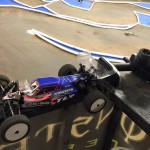 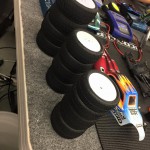 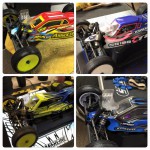 In the 17.5 buggy class it was all Kyle Layton. The JConcepts driver from Northern California showed the SoCal and AZ boys the fast way around the track for an entire main and pulled a large gap. The battle was on for 2nd between Brendon Wheatly and Eddie Bernal who seemingly raced together for an entire 10 minutes. Brendon put together an impressive final minutes and secured 2nd while Eddie lost touch of 2nd after some miscues and took the final 3rd spot on the podium. Kyle Layton took the checkered flag with the JConcepts equipped B5M to the pleasure of sponsors and his dad who was in attendance.

The final main of the day was the most anticipated with a battle set between the 2 most famous Ryan’s in the industry. Maifield jumped out to the quick lead while the whole field adjusted to evolved track conditions. Cavalieri turned in a little early on lap 2 and took quite a few cars for a spin with him. This incident gave Maifield a little cushion and adjustment time to work into the extremely edgy track. The field sorted back out with Maifield leading, Cavalieri 2nd and Kody Numedahl 3rd. The Ryan’s took their turn getting through traffic which adjusted the race gap anywhere from 4 to 7 seconds. In this race it seemed Cavalieri was making the small bobbles allowing Maifield the breathing room necessary to drive without heavy pressure. In 3rd, Kody Numedahl made up a lot of time and became a threat for 2nd. As time expired Maifield took another 2015 victory for JConcepts and TLR while Cavalieri would settle for 2nd and a hard charging Kody Numedahl finished 3rd. Both Maifield and Kody relied on JConcepts all weekend using the proven Dirt Webs tires in gold compound. Finnisher front wings were used by the top 3 drivers for that added stability and force while Maifield topped off his winning ride with a Finnisher body.

A great weekend for the JConcepts team at OCRC Raceway always makes a returning flight to Florida that much more enjoyable. Thanks to OCRC Raceway, Robert and Nick Black as well as Jackie Thayer for always making us feel comfortable and to our loyal drivers and customers in the Southern California area. Thanks for the support and see you next year!

JConcepts has arrived and setup at OCRC Raceway for the annual Surf City Classic. One of the hottest events in Southern…