JConcepts Team Driver Steven Hartson recently attended the 2015 Masters of Dirt event hosted by Beach RC & Hobbies located in Myrtle Beach, SC. Steven had some great competition from the locals including JConcepts driver, Griffin Hanna. With a win in all 3 classes, Steven was proclaimed the 2015 “Master of Dirt”.

Steven sent us along this report from the event…

“The first annual Masters of Dirt race was held in Myrtle Beach, SC. I arrived on Friday for the practice day. Initially it didn’t seem like a big turnout, but by the end of the day a pretty good crowd filled the building. I could tell that the high speed clay track would make for some great racing. For the first half of the day, the track was a little slimy and took most of the day for traction and groove to come up. All 3 of my vehicles were on point with gold bar flys on 2wd and 4wd, and gold dirt webs on truck. The race format was interesting with all 3 modified classes being combined at the end for the Masters of Dirt award. I was looking forward to the 3 round qualifying format on Saturday.

When I arrived on Saturday, the track looked even better with grip coming up more which I enjoyed. It was clear after the first few qualifiers that the local talent of Griffin Hanna was going to be hard to beat. I had decent runs all day, but never found the speed to top Hanna’s qualifying runs in all 3 classes. I would start 2nd on the grid in all 3 for Sundays double A mains. I knew I would have to drive perfect and put pressure on Griffin to have a chance.

The main events were 10 min long with a double A main system. A1 in Truck I ran 2nd behind Griffin for the first few minutes, I got by and started to pull away. Unfortunately his car broke shortly after. I then finished the 10 min main and won by about 10 seconds

A1 in 4wd, I again started behind Griffin. I followed closely behind for a few laps until he made a slight bobble. I was able to get by and start pulling away until I crashed with 2 laps to go. Luckily I was far enough out and cruised to the finish.

A1 in 2wd I put a lot of pressure on Griffin until about 4 laps in when I was able to get by him. I got by for the lead and never looked back to take the win.

The A2 mains were very similar, I was able to get by Griifin which allowed me to cruise to the victory in all 3 classes. With the win in all 3, I was also awarded the 2015 Master of Dirt as well.” 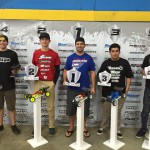 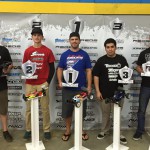 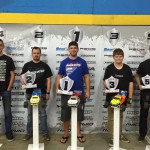 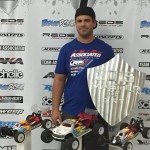