JCP-RC Raceway located in Indianapolis Indiana, the motorsports capital of the world, played host to the 1st annual JCP-RC Winter Cup. Over the weekend of February 21st-23rd, the 3 day event brought in just over 160 entries from across the tri-state region to try and claim a title in what will be a must attend event in the years to come.

Consistency was the name of the game for the event as drivers competed in a practice seeding round on Friday. Using the drivers full 5 minute practice run laps and times to seed the drivers for qualifying for the remainder of the event. Once seeding had been determined, the event used 3 rounds of qualification Saturday, and 1 round on Sunday using qualipoints to set the main events. Triple A-mains would then determine the winners on Sunday in the 2wd Buggy, 4wd Buggy, Mod Truck, and 1/8 E-Buggy classes, while 10 minute A-mains would determine the winners in the 2wd SC, 4wd SC, 17.5 2wd Buggy, and Novice classes with bump-ups in all classes.

JConcepts/Team Associated team driver Adam Rayls was the man to beat in the 4wd buggy class. Adam was able to grab the TQ spot, and win 2 of the 3 triple A-mains to claim the title in the class. Adam’s Team Associated B44.2 was glued to the track on JConcepts Green Dirt Webs in the rear, and Gold Dirt Webs in the front. Additional JConcepts team drivers Nate Jaskot, and Ben Ellis finished 2nd and 4th in the class respectively also using the same tire setup. JConcepts/Team Associated team driver Ben Ellis went undefeated in the Modified Truck class for the weekend. Ben TQ’d the practice seeding round, all four rounds of qualifying, and winning the first 2 of the 3 triple A-mains to claim the title. Ben’s Team Associated T4.2 was locked in on Green Pressure Points in the rear, and Gold Pressure Points in the front. Team driver Adam Rayls finished 2nd in the class also using the same tire combo. With 4 JConcepts team drivers in the 2wd Buggy A-main, Green Dirt Webs in the rear and Gold Dirt Webs in the front were the tire of choice. Some bad luck though would keep the team from getting the win, but they were able to get a podium with a 2nd place from Colton Kruse. Fellow team drivers Adam Rayls, Ben Ellis, and Nate Jaskot would finish 5th, 6th, and 10th respectively. In the largest class of the weekend, JConcepts/TLR team driver Tyler Jones was a man on a mission in 1/8 E-Buggy top qualifying the class and winning the first 2 of 3 triple A-mains to win the title. Tyler’s TLR 3.0 was untouchable on Gold Bar Codes. Fellow team driver Nate Jaskot finished 5th in the class also on the same tire setup. 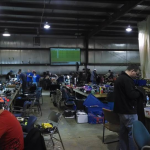