For the last 5 seasons, racers have converged in St. Charles, MO for the JConcepts Winter Indoor Nationals. Always the first stop on the Indoor National Series the SmacTrac crew and Scott McDonald always prep one of the finest tracks on the series with a fresh layout and consistent surface. For this year the crew made the decision to go with a more simple, racing friendly layout with 2 very fun triple jumps. The wood rumble strips, hip jumps and long back straight away heading into a chicane made for exciting racing all weekend.

Friday evening the event held a seeding round of practice to help set the heats for racers heading into Saturday and Sunday’s qualifying. The shuffling helped all drivers take a position among their peers for each to produce their best individual runs possible. Tanner Denney and Steven Hartson highlighted the seeding practice by taking the top spots in 2wd and 4wd modified respectively.

Qualifying started early Saturday morning and drivers were antsy to put down the best runs possible. Steven Hartson TQ’ed all 3 opening rounds of 2wd, truck and 4wd modified. The IFMAR World Champion ran clean while others seemed to battle small mistakes taking them off the coveted pace. Tanner Denney surprisingly led the A-qualifier in 2wd modified until a mistake and issues with other vehicles cost him the clean run.

Rounds 2, 3 and 4 went to Tanner Denney in the 2wd modified class while Steven TQ’ed round 2 of 4wd giving both drivers the overall TQ in both classes. Steven maintained the overall TQ in the modified stadium truck class, JR Mitch took top qualifying honors in the 4×4 SCT class, Brian “Dirt” Kinwald sat on top of the 2wd modified SCT class and Rod Rippee was the TQ man in the 40+ modified buggy class. With JConcepts drivers taking the TQ in 6 modified classes it was clear the Dirt Webs and Bar Codes in green compound were the hot ticket for the SmacTrac conditions.

During each round an RC10 demo race was run to showcase the RC10 Classic and RC10 Worlds Car from yesteryear. Brian Kinwald, running a replica of his 1993 IFMAR winning RC10 was a crowd favorite with his yellow wheels, Dirt Webs tires and 8.0 Reedy Sonic motor. Tanner Denny and Jason Ruona ran RC10 Classics equipped with the standard 6-rear transmission and 17.5 Reedy stock motors. The group of drivers always put on a show playing some fun hide and seek with each other until the Dirtinator decided to pour on the power and take off from the field for good. Tanner and Jason, equipped with the 1.9” and 1.7” JConcepts Hazards wheels with matching Double Dee’s and Rips tires and Detonator body showed even the oldest RC10 had great performance against the demanding SmacTrac layout.

The main events started in the modified classes with Denney taking a lead in the 2wd modified class with JP Richards, Taylor Larsen and Steven Hartson in tow. A mistake by Denney allowed Hartson into the lead where he cruised with the JConcepts equipped B5 to victory. A2 began with a mistake by Denney over the triple jump where JP Richards and Steven Hartson squeezed by into 1st and 2nd. Hartson was all over Richards shadowing his every move until they touched just in front of the drivers stand, Hartson showed sportsmanship and waited for the marshal to recovered Richards vehicle. Denney was catching the front 2 drivers with some incredible laps and squeezed by both drivers into the lead where he held it to the finish.

A3 started with Denney off to a quick start ahead of the field. Grippy conditions set-in for this event and it seemed to gel with Tanner’s aggressive driving. Putting down record laps all the way through the main, Tanner was on a mission to get the victory, which he did in convincing fashion to take the overall championship. Steven Hartson took 2nd overall ahead of TLR’s JP Richards in 3rd. Dirt Webs in green compound were the dominant tire with 1st – 11th place all on the new popular tire by JConcepts.

4wd modified began and Steven Hartson took the A1 lead with Tanner Denney on his bumper. Tanner made an aggressive move coming off the triple jump section and flat landed just inside of the World Champion. Tanner made the pass stick and he was off and running and into the lead. Tanner was gone taking the win and there was a small scramble for 2nd and 3rd. JR Mitch snatched the 2nd position and put down extremely quick laps to established his position. A2 began with some mayhem at the start as Steven Hartson hung up the 3rd turn and 2nd qualifier Tanner Denney ran into him. JR Mitch took the easy line around them and took over the lead on just the first lap. The 22-4 equipped with JConcepts Dirt Webs and Bar Codes was zeroed in and extremely stable taking lap after lap with speed. Cody Hollis made a great charge to finish 2nd and Josh Wheeler in 3rd.

A3 was the deciding main with 3 drivers capable of winning the overall. Immediately Steven Hartson jumped into the lead carrying the field around for the first several laps. Tanner Denney was in the 2nd position and JR Mitch 3rd. Tanner dropped down into 3rd after a mistake allowing JR some breathing room in 2nd. At this point it was Hartson out front and Mitch in 2nd with a gap back to Denney in 3rd. Hartson made a mistake allowing JR into the lead where he looked extremely comfortable. Hartson made up time on the leader but more mistakes dropped him behind JR who had the 22-4 on rails taking A3. The overall finishing order was JR Mitch 1st, Tanner Denney 2nd and Josh Wheeler 3rd. The top 2 drivers were hooked to the track with JConcepts green compound Dirt Webs and Bar Codes. In fact, 10 of the 11 A-main drivers chose JConcepts Dirt Webs to tame the course.

The 4×4 Short Course A-main started quickly with TQ JR Mitch getting clean opening laps. JR stretched it on the field while he opened up the TLR SCT-E 2.0 truck and laid down some ultra quick lap-times. Once the 8 minute main was complete JR took a well deserved win with Wade Moore taking 2nd and Chris Fristoe in 3rd. JR chose the Pressure Points in green compound as the winning tire to grip the track with ease.

Brian “Dirt” Kinwald dominated throughout qualifying in the 2wd SCT modified class and sat up top in the pole position. As the main sounded it was Kinwald taking the early lead with Cody Hollis in 2nd. Cody made a few uncharacteristic mistakes dropping him to 4th and allowed Kinwald to open a sizeable lead. Kinwald was in cruise mode and looked comfortable dropping mid 15 second laps. With just 4 minutes left in the race disaster struck for Kinwald as an electrical problem sidelined the former World Champion. Luke Richards benefitted from the problem and took over the lead which he held to the finish. Justin Driemeier finished 2nd and Cody Hollis recovered to finish 3rd.

JConcepts would like to thank Scott McDonald and the entire SmacTrac crew on a great event. A great layout, surface and enthusiastic racers made for a great weekend and everyone is already prepared for next year. Thanks to the official sponsors of the JConcepts Indoor National Series – JConcepts, Team Associated, Reedy, Kyosho, TLR, MIP, Viper and the official media partner RedRC.net. 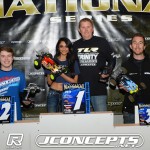 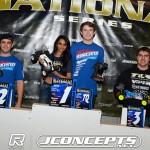 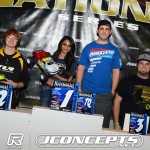 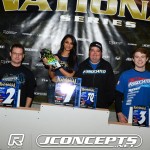 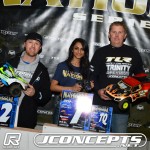 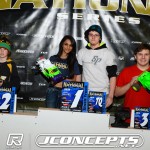 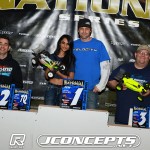 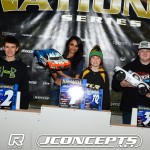 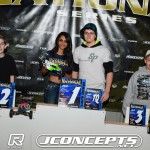 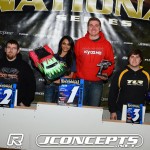 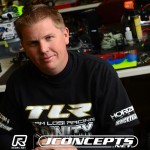 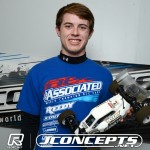 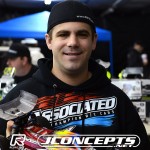 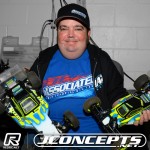 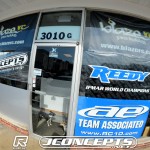 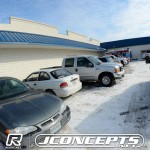 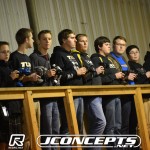 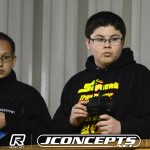 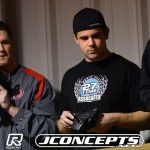 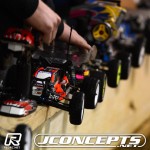 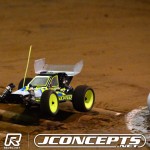 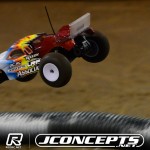 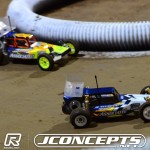 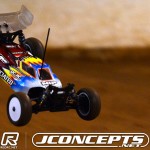