The 2013 PNB VI once again lived up to its name! Located in Unadilla, GA the event is 4 straight days of R/C insanity that cannot be explained in words and only experienced. Year after year, racers from all over converge in record numbers to put themselves and their equipment through the treacherous track conditions and endless days/nights. To add a twist to the spectacle; the PNB crew also added a 1/10th scale program to the event with its very own mini-psycho track layout that would test the limits of the 10th buggies (2wd & 4wd). This was JConcepts 3rd consecutive year attending and supporting the PNB race as a proud sponsor of the event.

The PNB crew in true Psycho fashion had 30 straight hours of open practice to open up the event Thursday morning. One round of qualifying got under way Friday afternoon for the 1/8th scale track and the 1/10th scale track had 2 qualifying rounds. Following qualifying, the track reopened for more practice until the remaining qualifiers began Saturday morning; plenty of track time is the theme here at the PNB.

Saturday saw one more round of qualifying and then straight into the mains for the 1/10 scale track. JConcepts drivers JR Mitch and Daimon Borkowicz each grabbed an overall TQ; JR in 2wd Mod class and Daimon in the 4wd mod class. Daimon went on to win the first round of triple A-mains in both classes with his JC equipped B4.2 & B44.2 buggies. A-main #2 was looking like a repeat of the 1st A-main as Daimon had nice leads in both, but unfortunately had some mechanical issues and had to retire. JR Mitch bounced back from a rough first main and took his JConcepts equipped TLR 22 back to the front by winning the 2nd A-main of 2wd buggy.

Round 3 of A-mains got underway and once again Daimon was in great position in 4wd for the overall win, but the PNB track claimed another victim and ending his race early. All eyes on the final 2wd A-main where teammates JR and Daimon would have to battle it out for the overall win. There was an early battle up front between the 2, but Daimon began to pull away by the halfway point. Once again Daimon’s bad luck continued when he collided with lap traffic breaking his car and ending his chance for a win. JR took full advantage and drove a smart race finishing 2rd and taking the overall win.

Meanwhile on the 1/8th big track, qualifying went very well for JConcepts drivers Max Flurer as he grabbed 2 TQ’s (2wd SCT & E-Truggy) and Chris Viesins taking one as well in the 4wd SCT mod class. JConcepts also had many drivers qualifying directly into A-mains throughout the classes.

(2wd SCT)
A-mains got started with all the electric classes as they ran double mains to determine a champion. The 2wd SCT got things rolling as TQ sitter Max Flurer battled with his JC teammate JR Mitch for the first A-main win. A-main #2 saw the same result, giving Max the overall win and JR finishing 2nd overall.

(4wd SCT)
Once again JConcepts team drivers would battle it out as TQ Chris Viesins, Max Flurer, and John Bernard Jr lead the field. Unfortunately Chris had a mechanical failure as Max went on for the win and John finishing 2nd. Main #2 was a repeat of the first main as the same 3 guys battled it out with Max taking the win, Chris 2nd, and John 3rd. This gave Max the overall win with John finishing a strong 2nd overall.

(E-Buggy)
JConcepts Barry Pettit proved that you always have a shot to win if you just stay with it and never give up. Qualifying 5th overall, Barry drove a smart first A-main and finished in the 3rd position just ahead of Ryan Lutz. The 2nd A-main had Drake getting another great start as he and Lutz would battle early, but a mechanical failure by Drake forced him to retire. This gave Barry the 2nd position behind Lutz where they would stay for the remainder of the race and ending up tied for the overall win. Barry won the tie-break with the overall combined fast times giving him the top spot on the podium. Never give up!

(E-Truggy)
A-main #1 got things off to an interesting start as Max Flurer and Blake Pickett were the only ones to get the extra lap, but disaster struck Blake first as his truck went into lipo cutoff giving Max the lead on the last lap only to break down as well. This forced the scoring to go back to the previous lap giving Blake the win and Max 2nd. A-main #2 went much better for Max as he lead from start to finish and the overall win.

Congratulations to all the winners and race organizers, Dave Leikam and Oliver Aspinwall. Special thanks to race directors, Jimmy Babcock and Nick Black, for running a tight ship and all the racers and sponsors who continue to make the Psycho Nitro Blast a must attend annual event. 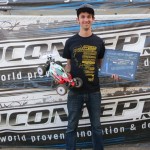 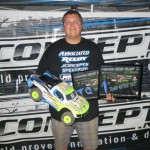 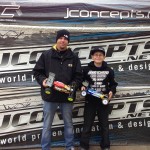 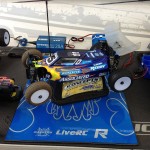 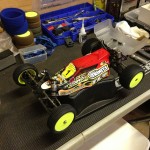 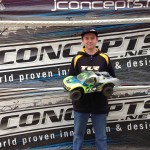 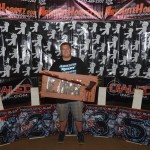 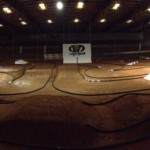 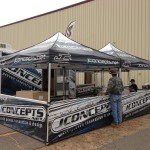 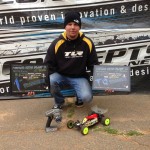