The first of its kind, the JConcepts Indoor National Series, completed at the HobbyPlex in Omaha, Nebraska. The 5 race national series dedicated to indoor 1/10th off-road racing rung the bell all year in terms of competition, race entry turnout and dedication. All year long, drivers competed to secure a position among the elite indoor drivers in the nation.

The schedule started in February for the Winter Indoor Nationals at SmacTrac Raceway in St. Louis, MO. The series then made its next stop during April in Dallas, TX, at Mikes Hobby Shop for the Spring Indoor Nationals. The tour rolled in to Chico, CA at Outback Raceway for the Summer Indoor Nationals. R/C Excitement in Fitchburg, Massachusetts hosted the annual Fall Indoor National and the entire series finished off in December for the finale at the HobbyPlex – HobbyTown facility in Omaha, Nebraska. The 5 race series gives drivers the opportunity to show their skill set on a variety of indoor tracks and surfaces. It’s also the ultimate test of product consistency, performance and versatility.

The season produced many highlights including a Winter Indoor National shootout between Ryan Maifield and Jared Tebo. The SmacTrac war ended with Maifield taking victories in the 2wd and 4wd modified classes while Tebo won the modified truck class. Daimon Borkowicz traveled from Florida to race in 3 classes including 17.5 2wd buggy where he came up with a 2nd place.

At the Spring Indoor Nationals Maifield once again took on competition from Steven Hartson and Dustin Evans. Maifield captured the TQ’s in the 2wd and 4wd modified class while Oklahoma driver Cody Hollis TQ’ed in the modified truck class. Once again, Maifield took command in the 2wd and 4wd modified classes winning easily in just 2 A-Mains in each. Dustin Evans responded nicely in 2wd SCT modified and Stadium Truck modified by wrapping up victory after also winning the first 2 A-mains.

July in Chico, California, brought on the Summer Indoor Nationals. The drivers faced a difficult surface that was a little more bumpy than usual and required a slightly different setup on the vehicles. Once again it was Maifield who took TQ in the 2wd, 4wd, 2wd SCT and Stadium Truck modified classes giving him a sweep in qualifying. In the single A-main events Maifield did not disappoint and went on to sweep all 4 classes of racing while dominating on JConcepts gold compound Bar Codes. Spencer Rivkin and Daimon Borkowicz also put on driving display in the 2wd stock class where Spencer took home the victory.

The fall season hit and the series rolled into Fitchburg, Massachusetts, for the Fall Indoor Nationals. A record turnout of over 400 entries set the stage for a battle between Dustin Evans, Ryan Maifield and Steven Hartson. Maifield took round 1 of 2wd, 4wd and SCT modified in a very long first round of qualifying. During round 2 drivers dropped their overall times and TQ runs were falling in each class. Dustin Evans took over overall TQ in the 2wd modified class bumping Maifield back to 2nd by just 4 tenths of a second. Maifield went on to take overall TQ in 4wd and SCT modified classes. During the single A-main events, Evans took the victory in the 2wd class while Maifield took 4wd and SCT modified convincingly.

The entire series drew to a close at the Indoor National Finals in Omaha, Nebraska. The HobbyPlex prepared an amazing track with colored infield paint work and outside track perimeter banner decorations. Taylor Larsen was on top of his game with the JConcepts equipped TLR 22 2.0 and placed it in the TQ position in the 2wd modified class. Ryan Maifield placed his B44.2 and SC10.2 vehicles in their respective class TQ’s as well. During the main events, Maifield was totally locked in taking a great start in A-mains 1 and 2 to secure the 2wd, 4wd and SCT modified class titles with ease. Cody Hollis took the modified truck class, Spencer Rivkin was victorious in the 2wd stock class and Matt Olson once again took the 4×4 SCT class.

At the conclusion of the event the overall points were immediately tabulated and winners were announced. Ryan Maifield took the overall victory in an incredible 4 classes of competition. 2wd, 4wd, stadium truck and 2wd SCT were all dominated by Maifield. 2wd stock was won by Arizona driver Spencer Rivkin. Chad Stoub took the overall in the 2wd stock SCT class and Stock truck was won by Nick Edgington. Matt Olson rounded out the series winners by dominating the 4×4 SCT class all season.

One choice was clear during the 2013 Indoor National Series; the JConcepts Bar Codes were the dominant tire. From Massachusetts to California the versatility of the Bar Code tire design and compounds such as gold, green and black made performance and selection a very simple process. Congratulations to the JConcepts Racing Team on a sensational series and overall result. 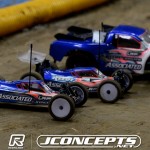 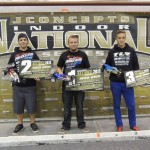 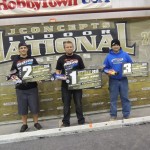 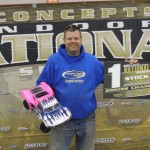 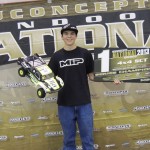 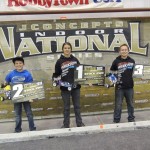 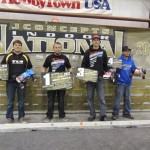 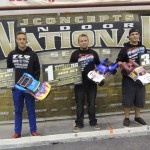