The 14th annual Dirt Nitro Challenge kicked off in Phoenix, Arizona, at the famed Fear Farm raceway. Joey Christensen and the Dirt crew arrived 2 weeks early to build the astonishing 3 tracks that make up the glamorous event. With a record turnout of over 670 entries, the Dirt Nitro Challenge has established itself as the largest 1/8th off-road event in the world. As the race began, a lot of weather rolled in taking away the official practice day. Rain, sleet and snow covered the track and made things extremely difficult on the Dirt crew to prep the track for racing on Thursday morning. As always, the Dirt crew did an amazing job prepping the track and eliminating the water and especially the soggy areas.

Saturday night the 1/8th truck final started with Jared Tebo taking the lead in the early stages of the 45 minute event. Ty Tessman moved up quickly from the 7th qualifying position to join Jared at the front of the pack. The 2 drivers paced each other for 15-20 minutes and had a safe cushion on the rest of the field. Ryan Maifield who suffered problems in qualifying and sat 11th on the starting grid started to work his way to the front of the pack. Driver by driver, Maifield picked his way through the field battling with Cody King, Ryan Cavalieri, Mike Truhe, Adam Drake and Billy Fischer along the way.

After a long haul to the front, eventually, Maifield found his way into 3rd place. Out front it was Tebo and Tessman battling for the win and a few uncharacteristic mistakes from Tebo gave Tessman a comfortable lead all the way to the finish taking 1st place, Jared Tebo took 2nd and Ryan Maifield 3rd. Ryan’s RC8T-CE was equipped with JConcepts all weekend including the main event where he utilized the Stackers tire in green compound with Profiled closed cell inserts, Elevated truggy wheel, Finnisher 1/8th truck wing and topped off with the National Championship winning Punisher truck body. Sunday evening, as the 1/8th buggy A-final was set to start, the drivers lined up and performed the usual warm-up routine. It was apparent the windy and cold day had taken its toll on the track conditions and as the sun started to set the drivers needed to make some small adjustments within their program to accommodate the new conditions. Drivers were introduced and with a relatively clean start Jared Tebo got the quick start. Jared made a small mistake getting sideways before the front jump section allowing Ryan Maifield to pull up alongside of Jared.

As the field approached the left side step-up, Jared had a slight miscue which aimed his buggy straight for the dead space which is off the racing surface. Ryan Maifield took the lead with Elliott Boots in 2nd. It was apparent the 2 drivers were the quickest in the early stages, both running very quick lap times. Ryan got the approach slightly wrong on the right side, step on and step off on the right side track and crashed allowing Boots to take the lead. Boots was out front and pushing, but the track was very deteriorated and it was difficult to maintain his early pace. Ryan Maifield put down one of his fastest laps of the main and pulled right back up on the leader. Elliott made several small mistakes in a row allowing Maifield to regain the easy lead.

Maifield was back out front and an edgy Boots dropped back allowing Ryan to open a gap. Several laps later Boots retired with a broken rear suspension part allowing Ryan to take a fairly large lead on the field. Maifield carried a 10 second lead for many laps with Ryan Cavalieri in 2nd. Depending on pit stops and strategy, Maifield paced the chasing drivers with ease. After some crashes in 2nd and 3rd place, Ryan escaped from the field a neared a 1 lap lead on the rest of the drivers. The JConcepts equipped RC8.2 was on rails the entire main event turning ballistic lap times throughout the race and crossed the finish line for a well deserved 2013 Dirt Nitro Challenge title. A Silencing performance, from the dominant driver from Mesa, Arizona was a sight to see. 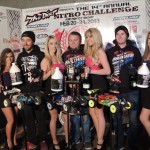 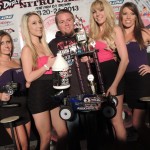 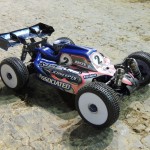 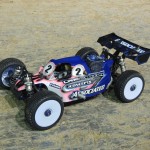 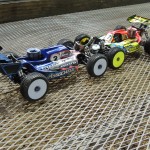 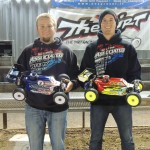 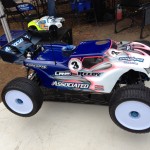 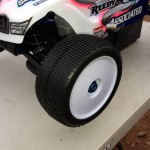 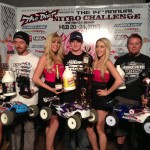