Tuesday is typically a slow practice day at the Cactus Classic but today there was a little more energy than normal. Originally scheduled or promoted as a wet track practice day turned into a race day practice session after the sugar hit the track around 1:00pm. A relatively short practice line turned things into controlled practice very quickly and it was 5 minutes up and down. 21 second laps seem to be quickest on the track and anyone in the 21’s in 2wd seem to be the early favorites. Maifield was the first to pop a 21 and then Tebo and Dustin Evans so things are looking competitive.

Maifield ran his modified truck twice in practice, which for a Tuesday is very rare. I’d venture to say he’s trying to get that win this year as opposed to the 2nd place he got last year in that class (the only one he didn’t win). Practice is difficult for Ryan here because he’s typically the most popular guy locally to visit with or get recommendations. His pit normally looks more like a hangout than typically race pit area. Everyone and anyone that knows Ryan stops by to chat, gossip or ask questions during practice days. He shows a lot of patience while everyone picks his brain trying to get faster. Typically he has to wrench at home to get his work done because trackside is almost more of a question and answer session. Ryan’s racing will ramp up as the stakes get higher all weekend.

I see a great weekend coming from Dustin Evans as the track and sugar surface seem made for each other. The 22 vehicles love this surface and this track will reward smooth flowing driving.

Jorn Neumann got his laps in today also and is racing in the 2wd, 4wd, racing truck and 4×4 SCT class. This is his first time racing in truck and he likes it so far. I see him being a serious threat in the 4wd buggy class this year as the Durango has ridiculous corner speed on the super grippy track. His 2wd buggy seems to be his downfall at the past Cactus Classic events so it’ll be good to see him get his 2wd back on pace at SRS.

Ryan Cavalieri had his ups and downs today as he gets his track time. He won racing truck last year and was in it for the wins in 2wd and 4wd until A-3. You can never judge pudge on practice or pit difficulties on the practice days. Once racing starts he always seems to be a serious, serious threat. I expect him to leave with 1 or 2 wins by the end of the weekend.

Dakotah Phend looked quick in practice and now his speed isn’t sneaking up on anyone anymore. He’s being watched for speed and lap times now and I expect him to be in serious contention for top 3 this weekend. When they sort by 3 fastest laps he should be one of the quickest.

I’ve only seen Jared Tebo run his 2wd and 4wd and so far his 2wd looks to be his best vehicle. He’s experimenting with rear and mid motor buggies which should be very interesting. Can a mid motor 2wd make a qualifier for Jared at the Cactus Classic? I suspect he’ll play it safe and run what everyone else is running but it would be an interesting twist if he goes mid motor. There is usually no reason for him to run his modified truck, that truck is always extremely good. He is probably the favorite in that class based on when I’ve seen it recently. Who will step up?

For the JConcepts drivers the orange compound Bar Codes seem to be the hot tire right now. Our standard Bar Codes for 2wd fronts and standard Bar Codes V2 on the rear. We are bouncing around on the rear inserts and deciding what is best. The track has amazing grip and staying smooth at high corner speed is so critical. Weight transfer front to back and side to side changes everything so maintaining steady, relatively flat and consistent placement is everything.

If you are in the area or at the event please stop by the tent and say hi where I’ll be sitting and getting race tires prepared all weekend. Look for more photos, videos and new product shots as the week unfolds. Back to work I go! A mini rant I need to go on here for a minute. Drivers, you don’t need to try and whip your RC car out on every jump. It’s getting annoying when I see young drivers steering opposite in the air on every jump. If this is a habit than the driver needs to break the habit. This is a technique popularized by Ryan Maifield and its changed all the drivers. When Ryan makes these mid-air corrections its for an advantage in either landing, next setup or an affect that other drivers don’t know how to utilize. The steering corrections and ability to manipulate the vehicle in the air is a technique reserved for points on the track where it is an actual advantage. Making a right turn left-side loaded jump coming into the straight away is very critical. When the track has unbelievable traction and smooth careful steering inputs are important, the last thing you want to do is upset the car just before a critical landing as you are going to be applying near full power. With all the gyro movements going down at that particular time there is no need to make it more difficult than it has to be. Thinking out an efficient lap and minimizing items that unsettle the car is the real secret to success for most. Just because you can turn your wheels in the air doesn’t make you a pro driver. It’s become a signature now of guys trying to act the part but aren’t really ready for the big time. It’s about lap times, pace and consistency. It’s not a show you are putting on for demonstration purposes. Every lap isn’t a victory lap! Ok, rant over. 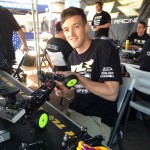 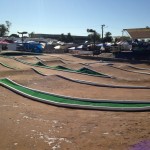 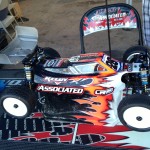 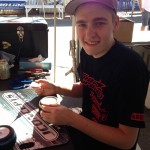 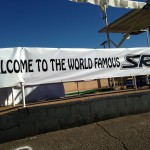 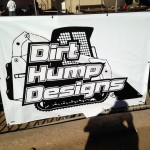