The 2013 Australian Nationals were held the week after Easter at the Mildura RC Car Club, approximately 500km northwest of Melbourne. The small but hardworking club is famous for putting on great events and attracted 260 entries despite being in a regional area. The club had prepared a challenging track and following recent trends the surface was sugared, providing massive traction in the warm weather. This event runs to a control tyre rule so every racer looks for an advantage in the rest of his equipment.

JConcepts were well represented across all classes, with Ash Peeler (2wd SCT) and Scott Giles (2wd and 4wd stock) taking home Australian titles and many other competitors relying on JConcepts products!

2wd Stock: This was Scott Giles all the way, taking TQ and 1st in A1 and A2 with his RB6 using Finnisher body and Bar Code front tyres.

4wd stock: Scott Giles did the stock double, TQing and winning all 3 A finals with his Finnisher bodied Shumacher, backing up his 2012 title. This was made a bit tougher after a small infringement in A1 netted him a 1 lap penalty, but he showed strong composure to win A2 and A3 to seal the title.

2wd SCT: For the first time, this was an official National class in Australia. Ash Peeler is a known truck specialist and backed this reputation up with TQ and 1st with his Kyosho equipped with the Hi-Flow body. He chose Pressure Point front tyres on the high grip surface. Glen Bonetti (4th) and Ray Munday (5th) used a similar combination. John Watkins also made the A with a great drive! The big jumps and slight headwind made the body performance critical, and the JConcepts Hi-Flow body was by far the most popular SCT body at this event.

Stadium Truck: Andrew Selvaggi (AE / JC) took this one down to A3 after a dominant win in A2. He finished 3rd with his Finnisher bodied / Bar Code equipped T4.2. Ash Peeler and John Watkins finished 5th and 6th for JConcepts after having some bad luck in the finals. Young Jai Davis (Team C) took home the win

2wd Open: This was the biggest class of the weekend, with almost 60 entries. Ray Munday (AE / JC) took out Q1 then Ash Peeler (Kyosho / JC) won Q2, both using Blue Rips in the cooler morning conditions. Ash followed through with a strong showing in the finals to finish 3rd, with young gun Glen Bonetti (AE / JC) showing great maturity and speed to finish 4th overall on his nationals debut! Congratulations to Andrew Gillot for his strong victory.

4wd Open: This class also had a large entry of over 50 entries. Josh Pain (Yokomo) dominated the event. Young gun Glen Bonetti was the star for JC, qualifying 3rd amongst a very deep field and coming very close to winning A3 before a last lap incident. He finished 4th but it wont be long until he is on the top step of the podium! He was joined by Ray Munday in the finals, both using Finnisher bodies, Hi-Flow wings, Fin turnbuckles and Mono rims on their B44.2s.

The day began on Wednesday with open practice in the morning that quickly had to be controlled due to the large waiting times that developed for a spot on the drivers stand. The afternoon was controlled with complete clearing of the stand every 10 minutes to allow fair track time for all. The track came up a treat with a smooth fast clay surface that had been treated with sugar to both bind it together and provide very high traction. Some final tuning to both cars prior to Thursdays practice heats was needed, but I was very happy with the speed and handling of them from the outset.

Thursday saw practice controlled in heats and allowed for each entry to have three 6 minute runs for final set up and tuning. Temps were in the mid 20’s celsius, and in the warmer afternoon third heat I switched to a 2.5wt heavier shock fluid all round to test for the expected 5 degree hotter temps for race day. The car settled down perfectly and I knew I was now onto my race set up.

Friday saw the running of the 2wd classes, with both Stock (17.5) and modified titles up for grabs. Qualifying was a close affair, but with fastest times in rounds 1 and 4, and fastest round of the day I secured TQ for the finals in 2wd Stock. The Kyosho RB6 was dialed with JConcepts blue Bar Codes and profiled closed cell inserts taking care of steering duties. The end result didnt quite do justice to the closeness of the racing, where the lead changed hands 4 or 5 times in the first 3 minutes, but following errors from the chasers, I managed to wrap up the win in A1 and 2. At the end of the day I managed not only to TQ the class, but also win my first 2wd Stock National title in 25 years of racing!!

Saturday came with the additional pressure of defending the 4wd stock title I won in Sydney last year, and having switched to the new Schumacher K1 chassis, I had worked extra hard both on the bench and on the track to get the car right for me. In addition to racing the event, I am also the president of the club at which it was held. The responsibility of which kept me distracted all day. For a little over 5 minutes and 30 sec’s, seven times during the day, I was forced to clear my head of all but just driving the wheels off the car in an effort to retain my title. Q1 gave me the confidence to get through the rest of the day when I set what proved to be the fastest time all day. That form continued, with all four of my runs within 5 sec’s of each other, winning every round of qualifying. From TQ on the grid, I made the smallest mistake on the start line within 10 seconds of the start, and after video review by the referee’s, was penalized a lap for the infringement. I had incidentally, won the final by about 3 sec’s from the 5th qualifier… Rather than drop my head, I became even more determined to secure the title by winning the next two finals of the triple A main format.

A2 and A3 were some of the closest and best races of my career, the K1 was solid throughout the day and never missed a beat, seeing me through to victories in both finals and the retention of my 4wd Stock National title. 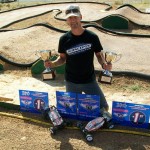 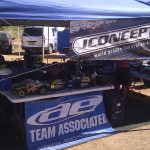 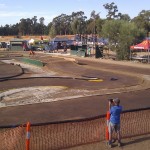 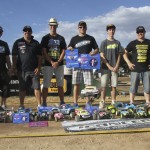