Monday marked the end of official practice as we head in to the first official qualifying Tuesday.

It rained last night, some say hard, some say not so hard, regardless, our AE pit spots and the tents had to be completely rebuilt this morning and they had to do a ton of track work. I believe at least 2 loads of saw dust was brought in. After the rain comes the heat, and more rain is expected. The breeze has left us today.

Practice started at 1:00pm today, original start time was 9am, then moved to noon, then to 1:00pm. In the meantime I went on a field trip to Walmart and McDonalds with Brent, Conrad Amezcua, Jay “smoker”, and Renato’s pit guy who is Argentinian.
The Walmart was fine, things seemed expensive but it’s really not, hell its Walmart. Some stuff is about the same price, like water and red bull, other items like sunscreen and a small cooler was really expensive. The guys also needed items like simple green and tire cleaner type products, they got the closest thing they could find, it wasn’t simple green but I guess it works.

As you all know we’ve had Internet problems here, LiveRC etc, they are working on it, hopefully they will correct this.

With only two practice runs today it was a mix of busy and not busy, not really high strung, yet.

After the end of the first round Maifield is showing 5th, but that’s just seating for qualifying, he had a really good second run also, now we are just waiting for the others to finnish too. (Finnish, ha)
Maifield and Jake are now getting prepped for tomorrow already. It’s 6:39 pm and there’s a few more heats to go.

So we ate dinner at the hotel again last night, the wine was good, the chicken a little better than the day before. The entrees do not come with side dishes here, ok fine, we can order separately, but there are only a few to choose from, obviously the French fries are popular, they’re good, the other options – garnishes they call them, are limited. A scalloped potato side, however Maifield said it was pretty hurting, but he ate it anyways. I believe spinach is an option but it doesn’t say how it’s cooked, and eggs, huevos, is an option!!? For dinner?

I did attempt a side salad last night, the menu said it had cheese, ham, walnuts, apples on it… Ok that works I thought. I think the cheese on it was cheese-wiz, I never found any apples, but there was some celery, I’m telling myself the other thing that I couldn’t identify was either turkey or like a watercress – I’m not sure. It was bizarre, Maifield said he ordered a chicken Caesar salad once (the warm -up perhaps) and his salad came with ketchup on it. I had the chicken ceasar for lunch the first day and it was fine, go figure. 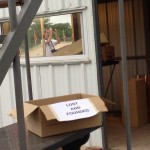 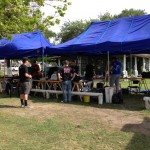 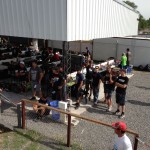 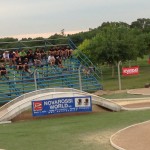 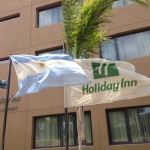