JConcepts dominates at 2012 Surf City Classic with victories in 6 different classes of competition.

Each year, racers in Southern California flock to OCRC Raceway for the annual Surf City Classic. A combination of Pro drivers, out of town racers, OCRC loyalists and a great rookie class make the Surf City a great location for all racers. A fresh track layout and state of the art overhead misting system, and announcing by Nick “the suit” Black sets this track apart. A revamped and updated hobby shop managed by the one and only Jake “Jackie” Thayer, you couldn’t ask for a better staffed event.

Straight out of the gates the JConcepts team came out swinging taking several TQ’s. The Bar Codes in gold compound provided the grip on the challenging track for most including TLR / JConcepts and AE / JConcepts drivers Dustin Evans and Steven Hartson who looked unbeatable in their respective classes. Drivers scrambled as track conditions changed throughout the weekend but the round 1 quick drivers remained up front and took the overall TQ positions, Dustin Evans (2wd modified), Steven Hartson (4wd modified and 1/8th E-buggy), Kody Numedahl (2wd SCT), Kevin Motter (2wd and truck stock) and Brent Thielke (modified truck – Finnisher T4.1 body).

Single 10 minute A-main events were scheduled for Sunday afternoon. Drivers in the lower mains bumped up and positioned themselves for a B or possible A-main finish. By late afternoon the A-main’s began with JConcepts / AE driver Kevin Motter taking 1st place in the stock truck class and finishing a close 2nd in the 2wd stock main.

Up next was the 2wd modified A-main with Dustin Evans sitting on the TQ position. Dustin immediately took off from the field with the TLR 22 turning the fastest and most consistent lap-times. After other drivers emerged from the opening laps AE / JConcepts driver Kody Numedahl moved into 2nd place. A heated battle between Brent Thielke, Steven Hartson and Cody Turner thrilled the spectators. Brent eventually pulled the well deserved 3rd place with Steven Hartson settling for 4th.

Moving on to the Pro 2 class (2wd modified SCT), Kody Numedahl with his fully JConcepts equipped SC10 FT left from the TQ position like a rocket. Setting the fastest laps, Kody ran opposed for only the first half of the race with Matt Castellano providing the competition. A mistake by Castellano allowed Kody to check out on the competition taking 1st place by a large margin. Castellano finished 2nd and Dustin Evans 3rd.

The fastest vehicles on the track, the 4wd buggies were up next with Steven Hartson starting up front. Hartson made a small bobble allowing Chris Jarosz to take an early lead. The 2 drivers were just a few seconds apart when Chris made a mistake allowing Steven to regain the lead. Steven held a sizeable lead with the JConcepts equipped B44.1 and hammered down on the competition. As the 10 minute main wore on Steven cruised to another solid victory at OCRC Raceway. Chris Jarosz finished a well deserved 2nd for the Sacramento based driver.

The last race of the day lined the started grid for the 1/8th E-buggy A-main. TQ Steven Hartson once again left the field and checked out on the competition and cruised in the lead by himself. The battle was on between Cody Turner and Jake Thayer for 2nd and 3rd with positions being exchanged throughout the race. At the finish Steven Hartson took 1st place, Cody Turner finished in 2nd and Jake Thayer 3rd.

Much appreciation goes out to OCRC Raceway on their annual event along with valued sponsors. If sun, surf and R/C are all areas of interest, start planning on the 2013 event now. See you next year. 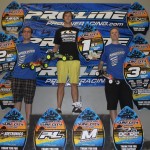 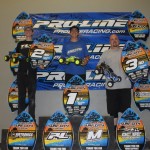 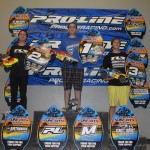 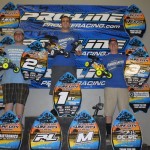 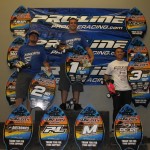