The weekend started out on Thursday with practice and a small club race that night. The track is run wet in the morning and then swept between rounds all day long. We found the best compound for this surface would be gold compound. For the 2wd class we ran Bar Codes rear and Pressure Points up front. For 4wd, there were some guys on Bar Codes front and rear and others on Pressure Point front and rear.

Friday was practice all day. The track crew were really good at having controlled 6 min runs for 10 at a time. With 133 entries, it kept the program going smooth all day. As the end of the day came near all of the team JConcepts drivers were going very fast, consistent and felt good about Saturdays qualifiers.

On Saturday we ran 3 rounds of qualifiers. After all was complete, JConcepts Team Driver Micheal Schoettler was sitting TQ in both 2wd and 4wd mod classes!

Sunday morning we had time to run one more round of qualifying. Brian Kinwald took TQ with the only 18 lap run of the whole weekend in 4wd mod. JConcepts driver Felix Law was in the B main in both 2wd and 4wd mod classes. He ended up bumping into both A-Mains!! Finishing with his best run in 4wd with a 3rd place podium finish!! Brian Kinwald and Michael Schoettler battled for a few laps in 4wd but Michael had an electrical problem that took him out of the race. Brian then took off and took the win after the 7min main. In 2wd mod, Micheal got caught up in an early pile up and ended up at the back of the pack. He worked his way up during the 7 min main to a 3rd place finish. Local racer, Luke Smith took the win in 2wd mod with his JConcepts equipped SC10, Luke chose JConcepts Pressure Points up front with Bar Codes in the rear.

Congratulations to all the winners and a special thanks to Scott Brown for hosting the event and to Scotty and Charlie for an awesome event!! 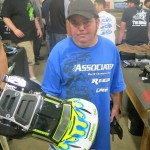 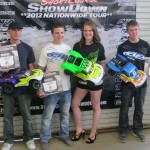 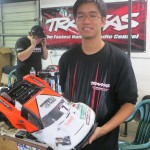 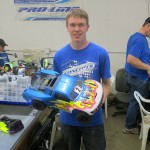 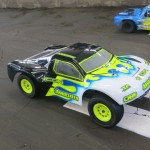 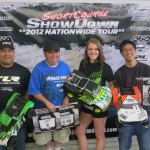