The JConcepts Racing team was out in full force at the Short Course Showdown Nationwide Tour at R/C Excitement in Fitchburg, MA. Dave Duncan made the trip out to support the team and product in an attempt to bring home some valuable victories during this opening racing of the prestigious Scotty Ernst produced event tour.

Qualifying started early Saturday morning and ran throughout the day with drivers jockeying for TQ position. At the end of the day Team Associated / JConcepts driver Scott Brown TQ’ed the 2wd modified SCT class with teammate Michael Schoettler in 2nd. In the 4×4 modified SCT class TLR driver Matt Castellano was able to track down TQ placing him on the pole position for the main event with TLR teammate Anthony Mazzara in the 2nd position.

Sunday morning arrived early and once again R/C Excitement was packed with drivers waiting for their main event. Scotty and Charlie bumped drivers all the way up toward the later races giving them a shot at the all important A-main. Meanwhile, the A-main drivers that were directly seated in the finals were back in the pits, cleaning and prepping their vehicles. A single A-main format meant the drivers needed to decide which tires would be best for the race and lay it all on the line.

The all important 2wd modified SCT main took the grid with TQ Scott Brown lining up 1st. As the race started Michael Schoettler was all over the rear bumper of Scott Brown. Scott did not fold under the pressure and held a great racing line for the first 3 laps as the back of the pack battled to stay competitive. Scott made a small mistake allowing Michael past and into the lead where he looked supremely confident. Scott dropped back into the pack and was now racing for 2nd – 4th. Michael was out front and cruising with his SC10 and turned lap after lap with consistency and speed. Crossing for the finish Michael Schoettler finished first and Scott Brown finished 2nd. Both drivers were equipped with JConcepts all weekend. Gripping the indoor surface with ease, the Bar Codes in blue compound mounted on Hazard wheels, provided the traction while the Hi-Flow SCT body topped off the winning ride.

In the SCT 4×4 class, Matt Castellano and Anthony Mazarra got out to a clean start, while Frank Root moved up to 4th in the running order. Matt had a bobble a few laps in, dropping him back to 4th, right behind Frank. Frank and Matt quickly caught up to the lead trucks, and made their way into the 1st and 2nd. Frank and Matt pulled out on the field quite a bit, and began to battle for the lead. Matt put great pressure on Frank for a number of laps, but ultimately, Frank would keep his cool. Running fast, clean laps, Frank would pull out a small gap to take a well deserved victory! Frank utilized JConcepts tires all weekend and the Pressure Points in blue compound provided the winning traction on the SCT-E vehicle.

Congratulations to Scotty Ernst Productions and Todd Anderson and R/C Excitement on another great event. 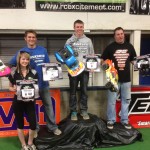 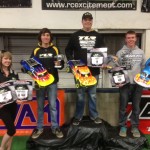 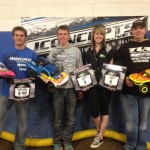 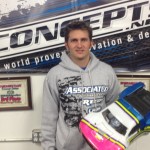 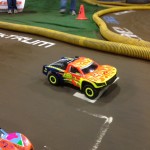 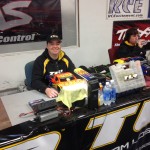 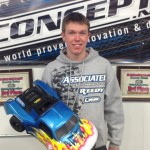 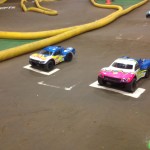