JConcepts gets off to a great start at the 2012 Short Course Kings round 1 event. Tracy Carver taking the win in Stock 2wd SC, Eddie Ramirez winning Super Stock SC, and Paul Wynn, Daimon Borkowicz, and Chad Cason taking 1, 2, and 3 in Modified SC.

In Mod SC, Paul Wynn set the tone all day with his JConcepts Factory Team SC10. Battle for the second spot heated up all day between JConcepts Drivers Daimon Borkowicz and Chad Cason. Daimon secured the second spot in the first qualifier, but Chad came back to grab second in the last qualifier. The pack was set, and the last race of the day started off great. Daimon got into some trouble early with traffic allowing Paul and Chad to stretch out a lead. Chad stayed on the heels of Paul for half of the race, but began to fade out in lap traffic. With only 2 laps left in the race, Daimon was now hot on Chad’s heels for the second spot. Out of nowhere, Daimon puts a move on Chad Cason at the end of the straight away that defied all laws of Physics. Paul Wynn grabs the win and TQ, Daimon takes second at the last minute, and Chad Cason settles for third.

In Stock SC, the competition was intense! The battle heated up quickly with Tracy Carver putting a ton of pressure on Brian Bennett. With only a few laps in, Tracey made a move into the top spot and extended a nice lead over Brian. A late charge in the A-main by Brian to pull right into the bumper of Tracy, but it was too late. Tracy Carver takes the win in Stock SC, following Brian Bennett in 2nd, and Mark Papero in 3rd.

In Super Stock SC, it was Eddie Ramirez who set the TQ early in the day, and continued to be on his own pace all day. The battle on the track was between Ken Shiver and Seth Moore who bumped up to Super Stock this year after winning Stock SC last season. On the very last lap, Seth Moore was within a truck length of Ken Shiver. Seth made an aggressive move to look on the inside of Ken, but Shiver shut the door, securing the second position. Eddie Ramirez picks up 101 points with the TQ and win, Ken Shiver in 2nd, and Seth Moore in the 3rd position.

In 4×4 SC, the battle was headed between Chris Intravia and Andy Darby. Chris led from tone to tone all day including qualifiers. Darby made a great run in the very last qualifier and missed TQ by just a few seconds. In the A-main, Chris and Darby went to the front of the pack and stayed within striking distance of each other. Andy Darby finally lost sight of Chris after running into lap traffic and had to settle for 2nd place. Chris picks up the TQ and win with 101 points, Andy Darby in 2nd, and Billy England in 3rd. 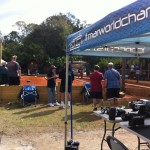 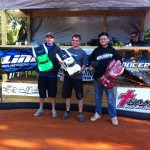 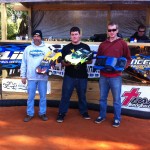 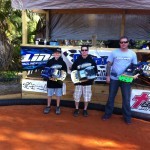 Don’t forget, there is still time to enter the JConcepts Clash Iron Man Challenge, with a chance to win a trip to the 2012 JConcepts Clash. Click HERE for details.