The 3rd annual JConcepts 1/8 Spring Nationals hosted by Hobbytown USA Hobbyplex in Omaha Nebraska was held this past weekend. Friday’s practice was on a wet track, and as the day went on, it began to dry out a little. Moving into Saturday with three rounds of qualifying to be run, race director and main man Alex Sturgeon getting things started promptly, with 131 entries, and 17 heats, Alex kept thing rolling throughout the day.

With the track drying out slightly from the previous days practice, changes to the cars and tires were in order to stay at the front of the field. Of the most popular tires, there was no clear choice, as it came down to driver preference to choose between Hybrids, 3D’s, some were on Bar Codes, or the new Black Jackets.

Sunday was Main day as a full day of racing was underway. With some racers sporting their new JConcepts T-shirt for being a competitor at the annual event, and many hoping to be heading home with a trophy at the end of the day. The electric classes were running triple A mains, and the Nitro were going to be running 45 minute A finals.

The Pro 4 SCT class had Josh Ford starting on the pole, with his JConcepts equipped truck. And he used his top spot to get out and stay in front of the field winning the first two A mains, and claiming the number one finish, followed by Danny Bartholomew in second, and Jason Bloom in third.

The Electric 1/8 had the TQ going to Matt Gosch and his JConcepts equipped buggy. Matt had the lead in A1 and was working on a good pace, when he had mechanical issues and had to pull out. Young Jason Hills took over, and had a great battle with Josh Ford, dicing back and forth with several lead changes all the way to the finish line, with Josh getting the win by two hundredths of a second. Matt came back in A2, and A3 to claim the victory in that class, followed by Josh Ford’s JC equipped Mugen, and Alex Sturgeon rounding out the podium with strong 2nd, and 3rd place finishes.

In the Truggy A main, Nick Gibson put his JConcepts equipped RC8T on the pole. At the tone Nick took off followed by Tyler Jones, and Tanner Denney. On the first lap, going into the lead, trouble for Tanner resulted in a pit stop that dropped him back in the field. As the fuel stops cycled thru, Tyler held the lead, as Tanner was making his way through the field, and back onto the lead lap. Laying down the fastest laps of the main, Tanner was in second place, and making time on the leader. 12 year old Tyler Jones kept his pace, and put in the laps as Tanner had another problem with 5 minutes to go. Tyler Jones was taking the top prize back to Indiana, with a great drive with his JConcepts equipped truck. And the two bump ups claiming the podium spots with Joe Walters in 2nd, and Jason McAllister taking the last step.

The final main of the day, 1/8 Buggy. In the early part of the main, Tanner Denney had worked his JConcepts equipped RC8.2 into 2nd place within the first few laps, and was putting pressure on the leader but taking it easy as it was a long 45 minute race. A mechanical issue would drop Tanner out and Matt Gosch was working his way into the lead, only to flame out a short while after getting to the front. TQ Jason Porter was laying down the laps thru the middle portion of the race and maintaining his lead. Josh Ford had moved into second and was keeping the leader in his sights. Matt Gosch worked his way back on the lead lap. Then a flame out by Ford would drop him back. Gosch, now putting pressure on the leader in the late stages of the race would come up short on a last lap mistake, giving the win to Jason Porter, with JC’s Matt Gosch, and Josh Ford getting on the podium.

The 2012 JConcepts 1/8 Nationals is in the books. The amazing Hobbyplex facility was the place to be and a high five to Alex for a well run program. A Thanks to all of the Hobbytown USA employees and all of the racers who came out. 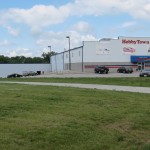 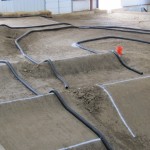 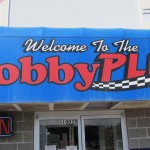 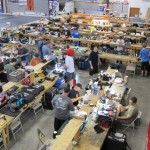 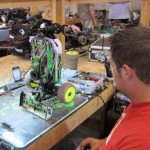 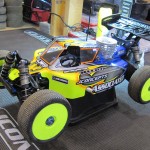 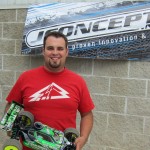 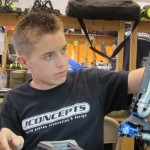 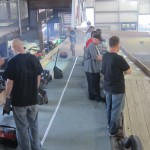 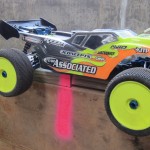 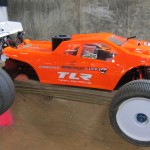 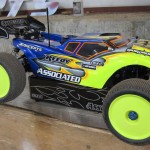 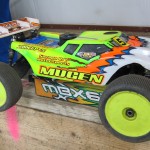 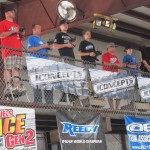 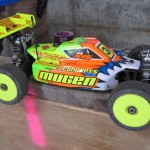 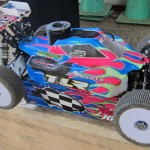 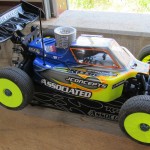 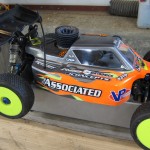 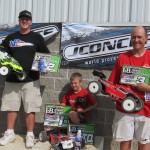 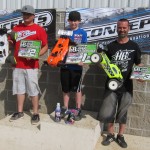 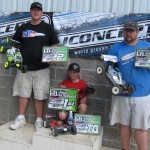 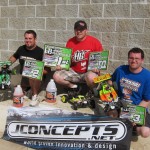 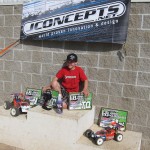 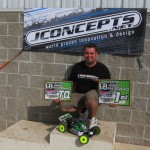 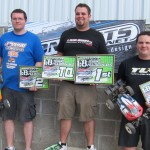 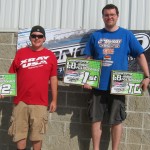 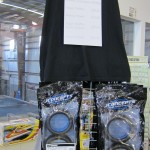