Back in Fehring Austria, at the 2012 Euros. Im getting my Euro on, as I learn there is not a Chillis anywhere to be found, or an Outback. Chipotle? Nope, this is all about their way, shopping the small market, dinner at small cafe’s and hotels without AC. At the start of the week, it was unusually warm for this area. The lack of AC was quickly noticed by the Americans that are here. Associated, Losi and of course JConcepts all have people here, along with this Mark Pavidis guy. I heard he makes…something RC related. Since then, the weather has changed back to normal, probably in the low 80’s for a high. And comfortable, cool, sleep with the windows open, night temperatures.

Dream Field. If you build it, they will come. Every time I look towards the back stretch, I feel like I’m at the movie set Field of Dreams. Tall corn surrounds the facility and if a baseball team would appear, I would not be surprised. I wonder what Kevin Costner would say about his ball field being plowed under for an RC track?

During the practice rounds, the track was dry and dusty. Not ROAR Nats dusty, but dusty all the same. A shower throughout the night made the track awesome for the first rounds of timed qualifying practice. However the second round was back to dry conditions, with a nice groove around the circuit, with dusty outer edges. Towards the end of the second round, it was believed that the dry track was slower. However, the last few rounds turned some of the quickest times of the week. The club sweeps the track every night, and repairs any major problems. Every day, it has become a hard packed surface, with dust on the edges. This would conclude the driving and it was on to the opening ceremony.

This race is almost like a Worlds event. Each country pits together in their designated area. Most of the fastest driver of Europe are here racing. Well, except the host country. With issues with the federation, Austria opted to not include their best driver Hupo Honigl. So now Hupo is sharing pit duties of Jörn Neumann with me, and being a huge help to ordering my food at night. English speaking locals are not hard to find. But reading any menu is a challenge.

To stay with their Worlds feel, an elaborate opening ceremony was held. A four piece horn quartet played intro music, as each of the 19 countries took place for photos, holding a placard, flags and most wearing a matching team shirt. Then each nation had it’s National anthem played. Messages from EFRA, IFMAR, and the mayor of Fehring welcoming the racers and thanking them for the economic impact, completed the ceremony. In the town square, event posters of the race are present along with concert and circus advertisements. Something you never see stateside.

For the start of round one of qualifying, the top 50 drivers are seated into heats 1 through 5 in an abnormal way. Then ran first of the day. From this point on, it will be like a Worlds rotation jumping about six spots as it rotates through the 5 rounds of qualifying. Round one produced few surprises with most of the front runners being at the pointy end of the field. Durango, JConcepts driver Jörn Neumann put in a strong run with his brand new proto-type Durango to claim a 6 for round one. A promising start to the event with very little time with the car and many hand made parts. Jörn and Hupo are still learning what the cars likes and working on changes every time on the track. With a simple fast layout, there is not much separation to the field, with many drivers on the same second. Third to fifteenth is only a few seconds apart.

Round two, with a safe run in the books, Jörn took a gamble with a tire choice unlike any here. Going with Barcodes in blue compound, Neumann’s car was on rails, as he easily drove to a 2 for the round, missing TQ by only two seconds.

The third and final round for the day would be delayed by a brief shower. Not enough to change the dirt, but the multi surface circuit had some very slick spots. With the rotation of starting qualifiers, the faster heats had a normal dry track, but everyone was scrambling on tire choice. Again, Jörn went with the Barcodes, but a few mistakes dropped him down. A great run, but the mistakes killed his overall time and he finished 13th for the round. Not a bad day when your throw out is a 13.
Some prepping for the final day of qualifying is going on now, and then another dinner of something I cannot pronounce. But it smells good, and taste even better. Hupo is hooking me up and Jörn has a concoction of Coke and orange soda that taste like tea. Life in Austria. 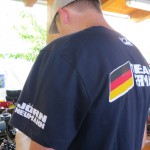 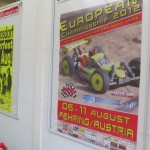 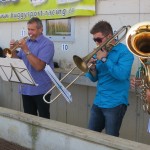 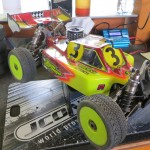 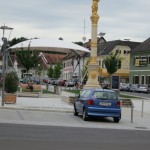 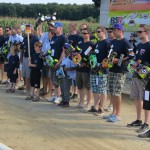