Well, today was crazy. I arrived at the track just as they started official practice and setup shop. Very impressive day ran by the main man himself Scotty Ernst. My LiveRC isn’t working at the moment but I believe there is 48 practice heats which I’m sure will tighten up after a re-sort. There was a little concern about the cost of the entry fee for for this event and so far I’m not really seeing it affect the overall entry numbers which is a great sign for the host track. There was an RCtech thread about this and some guys were really riled up about it. Its been my experience that the most riled up ones didn’t intend on running the race anyway. I could be wrong….

I’m having a great time despite kind of just being in my man tent all day mounting tires and bodies. It gets a little lonely over there but the visitors I get are much appreciated. Me and my Jawbone mini boombox have been kicking it all-day. I have to give a shout-out to Dan Hartson who has been getting me lunch the last couple of days and without him I don’t know if I’d be eating anything during lunch.

Allison arrives today so I’ll have some help in the pits and we will be able to bring some more photos and video. I purchased a new camera and forgot the adaptor I use to plug the SD card into my iPad but Allison has it with her so we should be all good. As usual I was living off the iPhone until now. The gadgets I was bragging about on the ride over will be unleashed today.

The AZ heat hit pretty hard today and sent track temperatures through the roof making things a little slimy during the heat of the day. The racers were really on edge running 2wd buggy but they seemed to cope as they realized it was the same for everyone. I thought to myself many times -I think this is a drivers track. But then again I heard people say while I was at the Psycho Nitro Blast that it was a drivers track also. So what does that really mean? Big huge and bumpy track with wood jumps and completely rutted surface is a drivers track also? Here is my theory, every track I’ve ever been to is a drivers track but just in different ways. My theory is, it’s a comfort window that separates everything. During PNB it’s really about not being afraid of the ruts, having a large window of comfort reacting to changing conditions and feeling at ease with man-handling the vehicle at any moment and just adjusting on the fly. You can’t really fear the crash in those situations and you are required to throw caution out the window. Your ability to do well comes down to your general driving style, experience and your overall comfort being in control of something that is out of control. Drivers that have a great throttle / steering rhythm do the best when it’s blown-out. You have to find the places to accelerate while having the steering at the correct angle. If you punch and steer in and out of the wrong hole, you are flying off the track. Sounds easy right? Well it’s a drivers track, so it’s not easy. Days Of Thunder, baby!!

Driving at SRS this weekend or during the worlds in Finland are what I’d consider drivers tracks in 1/10th scale. This is about your comfort level driving the correct racing line and pushing out that extra couple of inches in one area to get the next turn at maximum efficiency while setting up for a jump you already know you have to clear dispite others being around you or perhaps being upside down. Racing like this comes down to your ability to drive with accuracy and having the ultimate control of something that is in control. Your success rests in knowing exactly when to power on and being able to adjust your breaking power / usage depending on the level of grip at that given moment. It’s a drivers track and it’s about comfort.

Moving on from that side-bar I’m reporting a great day from the JConcepts crew here at SRS. Maifield looked great today in all 4 classes and he appears relaxed and ready for battle. He’s the top seed going into qualifying in all 4 of his classes by virtue of having the fastest 3 consecutive laps, he also has 3 of the fastest runs overall. We will see how things go in qualifying. He ended the day with 2 amazing practice runs in 2wd SCT, 2wd and 4wd modified buggy. The 2wd buggy run in particular was one of those jaw dropping runs. The mental image of guys watching. The Captain Morgan pose with one leg up on something, eyes in focus on one point, a little drool coming from your mouth and these thoughts running in your head. Holy crap, I can’t do what this guy is doing right now, he must have something special. These are the times in RC where guys develop a man crush. Ha ha

Dustin Evans, running Bar Codes on his 2wd SCT truck, picked up the 2nd seed in Short Course with an impressive run. Kody Numedahl and Brian Kinwald were also impressive in SCT placing themselves right up front.

As I mentioned earlier I picked up Allison at the airport so I’m looking forward to a great day of qualifying today.

I’m really happy with the JConcepts product so far as we tested just about everything we wanted today so hopefully we can see some results of the hard work as quickly as possible. Wish us the best of luck on this drivers track. 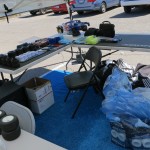 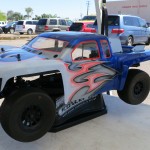 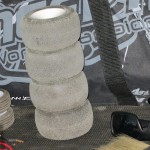 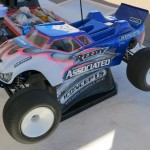 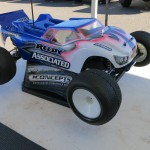 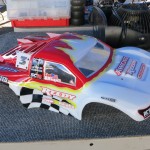 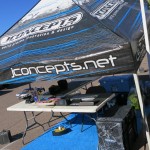 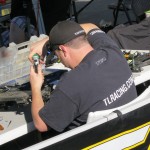 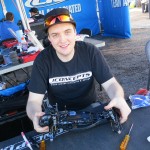 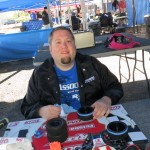