2012 Battle In The Desert Series Wrap-up So as I sit here in front of my computer going over the many memorable moments from the 2012 BITD series I can’t but feel extremely grateful to everyone who attended and made the series such a great success. This series was a thought between Keoni and myself last year in an effort to join both tracks in a fun, yet competitive series during the summer months. So going forward with another year was going to be a challenge, so a special THANKS to Competition Hobbies and Ricky Gaynor from the new SRS/Hobbytown getting on board to make another year possible. Also this year marks some Factory assistance in sponsorship. So first thanks goes to JConcepts for being a title sponsor as well as Stick-it 1 racing thru Brian Causse being a title sponsor as well. Later in the series we received assistance from B-Fast performance parts as well. So without these sponsors and the help from the tracks hosting, the event would not have been so successful. So the format was for a 6 race series and let me say, the racing was extremely close in just about every class coming down to the final races of the night.

So onto race 6 of the series.

In the Novice division there was a full 10 car field for the finals—In qualifying Josh Landech running the buggy was able to Tq with John Beaver in 2nd and points leader Ian Moller in 3rd. At the sound of the tone everyone made there way into the bowl turn, Landech and Moller got away with Beaver getting shuffled to the back of the pack. Moller soon made his way around Landech who later succumbed to John who was hot on the trail of Moller. In the end Ian stayed in the middle of the track and took the win, John Beaver in 2nd and Kelby Osborne making his way into the 3rd spot.

In 2wd buggy the points were very close between Nathan Chase and Chris Wamsley, The tone sounded for the main and Chase was on a mission, Brandon Wamsley was in 2nd for a couple of laps then Chris tried to make the pass. Eventually Nathan Chase set the cruise and lapped the field, Nick Beaver held the 2nd spot and Chris Wamsley had to settle for 3rd.

Onto 13.5 S/C, The battle was set for Ashe Deering and Taylor Spencer to duke it out for 8 minutes. Taylor led out for the first few laps then Ashe made the move inside, for the next 7 ½ minutes these two went back and forth swapping the lead so many times I lost track. In the end it was Deering taking the win over Spencer in the last corner winning by get this 0.113!!!!!

Stadium truck was next on the line, Nathan Chase who had been on fire all night looked to possibly be gunning for the win in this class, After the clock had wound down it was Chase taking the win with Jan Moller in 2nd and the every always helpful Darrel Forrest in the 3rd spot.

2wd Expert stock buggy was up next, Pole sitter Austin Zeppin was looking very poised to take the win for the night, had been very fast and consistent all during the night. Going into the race Helms and Lake were separated by a few points so it would come down to finishing order. Zeppin and Lake got out at the start with Helms getting shuffled back to 5th. For the next 7 minutes Lake and Zeppin traded paint with Zeppin getting a comfortable led. Lake was settled in 2nd till mechanical issue started to drop him back. Helms worked his way up to the 2nd spot with Akiyama rounding out the top 3.

2wd modified was on deck, Richard Lake tq’ed with Charles Hicks in 2nd and Tommy Hinz in 3rd. Tone went off and Hicks was looking like he was ready for nationals, went on a tear and led it out. In the end Hicks with the win, Hinz in 2nd and Lake in 3rd.

Expert S/C was set for an epic battle between Helms and Beaver. Beaver tq’ed both rounds. At the sound of the tone Beaver was checking out Helms dropped as far back as 3rd with Brandon Fox in the hunt with Vinnie Pedersoli.. Beaver led till the half way mark then had to give chase to Helms. At the final buzzer Helms got by for the final lap with Beaver in 2nd and Brandon Fox in 3rd.

4wd S/C was the Tommy Tommy show, his truck was on another level—looked super easy to put wherever he wanted. So barring a mechanical failure he was the favorite. Brandon Fox had some mechanical issues that dropped him back with his stock s/c after his 4wd decided to drive itself. In the end Hinz took the win with Dave Wells in 2nd and Mike Stanger in 3rd.

4wd Modified was the final class of the night, Mac Mitchell showed he could tq but would the ball cup curse come back to haunt? Straight after lap 1 it happened and Mitchell dropped back till he retired with a broken vehicle. Dave Wells took the win with Mike Stanger in 2nd and Jan Moller in 3rd.

Final average for the series was just over 95 entries per event, so big thanks to everyone.

On that note, I truly want to THANK everyone who came out and participated in the series also thanks to all the behind scenes people at the tracks that helped make the series a success. On a personal note I want to thank my sponsors Team Associated/Reedy/Lrp
JConcepts and Competition Hobbies. Without there support I wouldn’t be able to have been able to support so many of my racing friends.

Here’s hopefully to next years 3rd Annual Battle In The Desert, until then look forward to seeing everyone at the track. 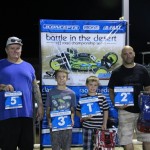 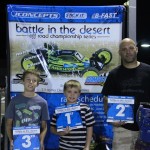 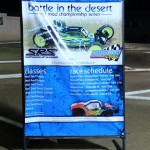 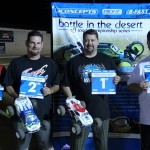 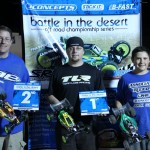 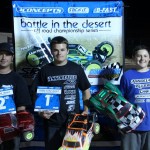 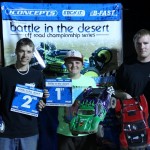 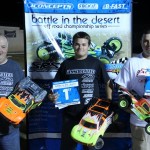 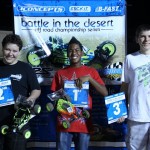 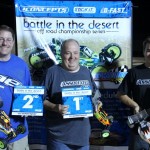 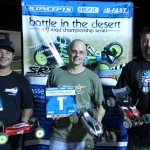 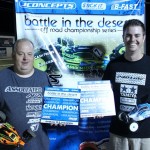 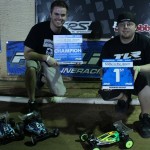 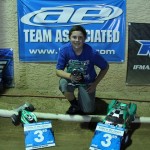 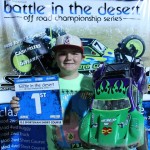