JConcepts was well represented once again at the 2011 Short Course Showdown Nationwide tour. Round 2 was held at the famous S&N’s Trackside Hobbies and R/C Raceway in Milwaukee, WI, where Scotty Ernst himself ran the entire show to perfection. JConcepts representatives Paul Wynn and Dave Duncan made the trip up to the event to support the complete line of short course products and partake in a little racing action.

JConcepts drivers, Brian Kinwald, Scott Brown, Chad Due and JP Richards were among the leaders all weekend long. Brian Kinwald, running the SC10 and SC10 4×4, provided quite a few highlights during qualifying with multiple TQ runs. Bar Codes provided the grip on the S&N surface while the Rulux 12mm hex wheels and Raptor body finished off a quick vehicle package for Kinwald. TLR ace driver Dustin Evans would take the modified TQ’s by the slightest of margins over Kinwald, setting up an excellent A-main.

In the SCT stock class Brian Lutz took an advantageous start while 1st and 2nd qualifier were left upside down after an early first-turn pileup. The TLR driver was running Bar Codes in green compound on his XXX-SCT and looked completely in control throughout. Luke Richards, also driving the XXX-SCT with green compound Bar Codes, was playing catch-up and turned the hot-lap of the main event while chasing down the leader and pulling into 2nd. Too much space remained, allowing Lutz to cruise uncontested while maintaining a comfortable lead all the way to the finish. The finishing order was Brian Lutz 1st, Luke Richards 2nd and John Schultz in 3rd. Impressively, 8 of the 10 trucks in the A-main were running JConcepts Bar Codes in green compound.

The Modified 4×4 class started with a pile-up which sent TQ Dustin Evans to the back of the pack and allowed JConcepts / Associated driver Chad Due to take the early lead. Chad held a large lead but soon found himself guilty of some mistakes and traffic problems which tightened the gap considerably. Dustin Evans was on the move and back into second place while battling with Scott Brown, Brian Kinwald and eventually Chad Due for the lead. After more jostling for position, Dustin emerged out front while Scott Brown moved into second. Kinwald came alive late in the race turning sub 16 second laps, as his SC10 4×4 with Bar Codes tires tore up the track putting him back into contention and into 3rd and just behind team-mate Scott Brown. At the finish, TLR’s Dustin Evans would not be denied taking his first win of the day. Scott Brown would finish 2nd with Brian Kinwald in 3rd.

Modified 2wd short course took the track for the last race of the day. Dustin Evans sat on the pole position with Kinwald in 2nd on the outside row of the starting grid. At the tone, Kinwald attempted a move but was denied overtaking for the lead. Kinwald cased the double jump which caused some carnage in the field but left Evans out front and Kinwald 2nd. Kinwald had the 2wd on point and pressured Evans over and over until a mistake by Evan gave the 2-time World Champion the lead. The 2 leaders were checked out and were putting on a show for the crowd while Scotty Ernst was pumping it up on the microphone.

Kinwald looked determined to take the win but Evans was showing some speed and pulled up on the back of Kinwald on the last lap and gave the “Dirtinator” a bump pass giving himself the lead. 2 corners later it was Kinwald returning the bump favor which caused Evans to slightly tumble. Kinwald immediately hit the brakes allowing Dustin to lead the last 2 corners and past the finish line to take a well deserved win. Both drivers were capable of the win and very gracious to each other on the last lap. Dustin Evans finished 1st with Brian Kinwald taking 2nd and JP Richards finishing in 3rd. Brian Kinwald, JP Richards, Chad Due, Paul Wynn, Matt Sunderlage, Brad Shearer and Sarah Ernst all earned A-main positions with the JConcepts Bar Codes in green compound. Rulux 12mm hex wheels and Raptor body finished off many of the same vehicles making it a popular JConcepts combination.

Congratulations to Scotty Ernst productions, Trackside Hobbies and the entire Showdown team on an amazing Nationwide round 2 event. 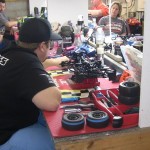 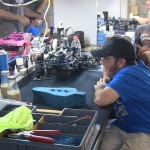 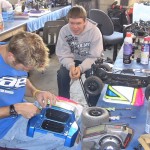 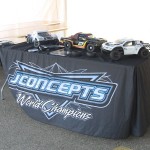 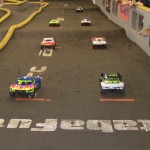 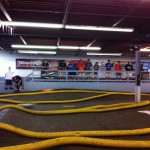 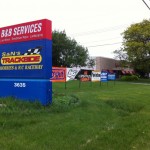 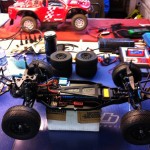 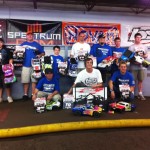 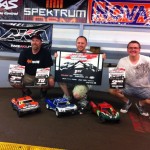 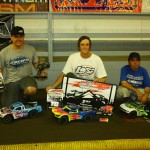 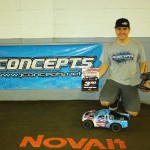