Ryan Maifield and JConcepts finishes 2nd at 2011 ROAR 1/8th Electric Nationals; by inches. Once again the ‘Big 3’ in off-road racing put on a display of driving speed and talents.

Hobbytown’s HobbyPlex, the site of 2011 ROAR 1/8th Electric Nationals in Omaha, Nebraska debuted a beautiful new covered race facility to the growing contingent of e-buggy and truck racers. The finest drivers in e-buggy / e-truggy took to the newly covered track to display all the latest product and battle for the 2nd ever ROAR National title in the relatively new division.

Once again it was Jared Tebo, Ryan Cavalieri and Ryan Maifield putting on a clinic in qualifying, jostling for position through all 6 rounds of qualifying. Tebo emerged as the TQ driver in the 1/8th buggy and truck classes setting up a royal battle for Sunday’s main events. The A-main events were run utilizing a triple A-main format, each main was 10 minutes in length.

1/8th E-buggy A-1 started and Jared Tebo was off to an amazing start with Cavalieri and Maifield forced to race each other in the beginning moments letting Tebo have some breathing room. Maifield made a move on Cavalieri taking over the 2nd position and set-out to put some pressure on the leader who was just cruising. The 10 minute main allowed Maifield to catch Tebo in the last several minutes setting up a battle for 1st and 2nd. Maifield applied the pressure but Tebo would not crack and crossed the finish line just 2 seconds in front of Maifield. Finishing in 3rd was Ryan Cavalieri.

A-2 started with Tebo once again getting a great start and he held a comfortable lead while 2nd and 3rd remained close. Maifield made a move and once again hunted down Jared with amazing consistency. As the 10 minute race neared the end Maifield turned it up a notch and got within 2 turns of Tebo who had been running a clean race himself. With only a lap to go Tebo had a miscue going through the deep dip in the track and Maifield overtook the lead which he maintained to the finish line outlasting Tebo on the final turn taking A-2 in dramatic fashion. Ryan Lutz finished in 3rd.

The grid for A-3 was set and Tebo blasted out front. Cavalieri gave Maifield some breathing room allowing him to get right behind Jared so the A-1 and A-2 winner could battle to the finish. The 2 drivers pulled away from the rest of the field running the quickest laps during the main. Maifield made a slight mistake at the end of the straight-away with a small traction roll which gave Jared about a 2 second lead. Maifield quickly reeled in the leader turning the fastest lap of the race in the process and pulled right behind Jared. Jared opened the door and allowed Maifield to take the lead with only 4 laps to go.

Ryan’s buggy looked in great form as the 2 drivers made the 2 difficult jumps in front of the drivers stand and then down into the off-camber double apex turn. Ryan turned in a bit too early and bounced off the corrugated pipe which gave Tebo the lead once again. Tebo held on the last 2 laps and drove very clean not allowing Maifield to the inside on any turn. The 2 drivers took on the final straight-away and Maifield got an incredible run going into the last turn, but Tebo held on with a great last turn and finished off his weekend in style with a super jump of the last table top narrowly missing the brand new scorers booth. Ryan Maifield would finish .1 of a second back and Ryan Cavalieri finished 3rd.

Congratulations to the winners, Alex Sturgeon and the entire Hobbytown Hobbyplex crew on a fantastic event. 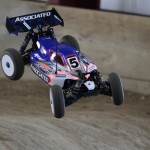 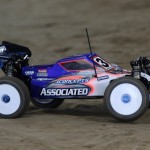 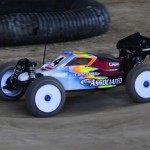 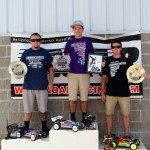