A race that will be remembered for years to come. With dark rain clouds surrounding the track, the Pro truggy drivers stepped onto the drivers stand to begin one of the greatest truggy races to ever be ran at the Nitro Challenge. With over thirty races already ran on the track, the Pros found a perfectly grooved track awaiting them for the first time all week. Jared Tebo would lead the field into the first turn. The giant hill turn would be the first obstacle, that would cause some chaos, with multiple trucks being forced off of the track. At the front of the pack a four truck breakaway would form with Tebo leading followed by Tessman, King, and Maifield who started in eighth and was able to get around four trucks on the first lap. After the first round of pit stops, the lead group would be cut to three, with King losing a wheel dropping him into the back of the pack. Tebo, Tessman, and Maifield would swap positions almost every lap, each driver just inches from the truck in front of them. Both Tebo and Tessman would have a cushion over Maifield by being able to stretch their fuel runs into the nine-minute range, allowing them to stop one less time at the end of the race.

Just over half way into the race, Tessman would drop out of the top three, when his truck flamed out over the large triple in the middle of the track. With Tessman out of the picture, it was down to two men. Tebo and Maifield would exchange the lead for the next fifteen minutes. Tebo would make his last stop is nine minutes to go, and be good to the finish. With seven minutes to go Maifield would come in to get topped off and find himself six seconds behind Tebo. Clicking off some of the fastest laps in the race, and skying the truck out on the 20 foot hill turn, Maifield would find himself on Tebo’s rear bumper with one minute to go. As the two screamed down the front jump section, the crowd was about to be left in awe. As Tebo hit the mound, there was nothing he could do to stop Maifield from jumping the large hill and landing in the valley in front of Tebo just before the double on the backstretch. With the roar of the crowd louder then the trucks on the track, the two drivers hit the treacherous double double triple section. With the lead, Maifield would be conservative and stick to singling out leaving just enough room to leave for Tebo to land the triple on the inside of him. The two would touch wheels, leaving Maifield on his lid, and allowing Tebo to take the win. The two drivers put on one of the greatest races in the last few years. Maifield’s tire of choice was the JConcepts popular Seven’s truggy tire. At the end of the grueling 45 minute main, Maifield’s tires showed better wear then other tires on the podium. Maifield stated after the race, that he was able to push the truck harder at the end of the race knowing that he had a tire that could take the abuse.

It just wouldn’t be the Nitro Challenge without rain. On Saturday night, rain showers moved into the valley dropping a good amount of rain onto the track. This mornings 9am start has now been pushed back to 1pm at best. The worst part of the storm was not the rain but the high winds. Team Losi’s tents were completely destroyed last night along with a few others. With the high today only being 50 degrees, most drivers have decided to prepare their cars in their hotel rooms, and arrive at the track later for their races. Today long race schedule has just become longer. From years of experience here, the track will be muddy this morning but will come around and end up grooved by the time the A Mains come around. 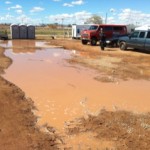 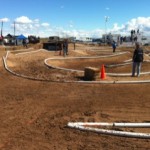 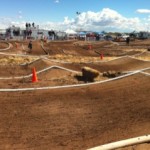 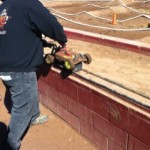 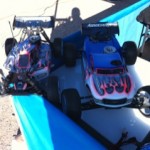