Well it’s been a great 2 weeks for me! It started with the 8th 2-Day national that was located in Herts in the UK. It’s a large dirt track, which has a huge following and a lot of local drivers. We had only been here once or twice before and we were hoping that we could get used to the track quickly, being such a large track it was going to be an interesting one!

Things didn’t start too well, having radio problems early on but eventually sorting things out. We tried a range of Tires and found that the Double cross was looking good, using its rounder profile to take the bumps better without cause a unstable car through the sections of high speed. Also Crossbow’s were working well and we would go into the semi placing 5th and deciding on Crossbow for the semi and Double cross for the main.

The semi didn’t start well but it was clean sailing from then, a collision between 3rd and 4th on first lap caught me in the middle and ending up second to last after the first corner. From this moment I drove a error free race to finish 2nd behind a flying Bloomfield and end up 4th overall on the Grid with Cragg TQ.

The final was adventurous! Again off the start I ended up in a pile of cars coming out around 11th, from here I drove well and pushed on the Double cross tires, learning new lines and getting faster all the time. Catching up with Cragg, Boots and Bloomfield to be in the mix, I managed to fight my way up and battling with Bloomfield for 2nd while Elliott stretched away a little. I came in for a pit stop and cut in the pits only for mechanic Jon Dell and Mark Dell to quickly restart the car and get me going.

Elliot also had a cut but this time on the track, this left myself and Bloomfield fighting for the lead, I put in a great session of driving to take the lead 5 minutes from the end of the 45min race. I then held onto my lead after a tough few minutes to take the national win! The first of many I hope!

The following week I headed to northern England and at a flat grass track, I had not had a great 2wd session and was looking to put this past me in 4wd. It didn’t start to well having a mechanical issue in round 1, although into round 3 and 4 and I took TQ in both round with new FTD’s in the process, lining me up pole in the A Main closely followed by my AE team mates Cragg and Bradby.

From Pole I went on to take a flawless win in leg 1, no mistakes and eventually I was able to cruise to victory from Tom Yardy by about 6 seconds after the chasing pack had made to many mistakes.

Leg 2 was not so easy, I started well only to make a mistake and dropped me to 2nd, from here I pushed to overtake Cragg who was up front, as he made a mistake through a chicane I pounced, only to tap his car and tag us both up allowing other drivers into the mix and myself down to 4th, this is how it would finish. Not a great race.

Leg 3: the crazy race! Once again a good start was ruined by myself after a crash. I pushed to hard and dropped down the order but I kept plugging away. I managed to get back into 3rd after passing Yardy before the start of the straight and tried to catch the lead pair of Cragg and Bradby, as I was closing Cragg crashed hitting the jump wrong and allowed Bradby and myself through, only 2 corners later Bradby made a mistake and allowed me to cross the finish line 1st and take my first 4wd national win of the season!!

All in all a great 2 weeks! Something I would like to repeat very often! 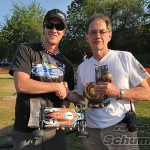 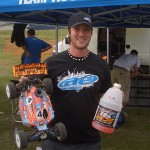 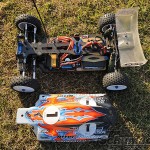