16th Annual Rumble in the Rockies

This past weekend was the 16th Annual Rumble in the Rockies race held at MHOR R/C Raceway in Denver, Colorado. Many drivers were in attendance who included Kody Numedahl, Dustin Evans, Matt Chambers, Scott Brown, Adrian Redding, and Scott Spear. The traction was very high and the track was very tight which meant for some very intense racing.

Qualifying started Saturday and everyone was quickly looking for the top spots. The first three rounds on Saturday ended with JConcepts Team Driver Kody Numedahl sitting on top in Modified Short Course with three TQ runs. Kody was sitting 2nd and 3rd in Modified 4wd and Modified 2wd respectively with just one more qualifier to go Sunday morning. The final qualifying round bumped Kody up to the top spot in 4wd so he would start 1st 1st and 3rd for the main events in the three classes.

In Modified Short Course and Modified 4wd the first two mains went in Kody’s favor which meant he got the win for both classes and did not have to run the third main in either class. Modified 2wd was a bit closer with Dustin Evans winning A1 and Kody winning A2. It came down to A3 which went to Dustin leaving Kody in the two spot.

Congratulations to Kody for another great race. 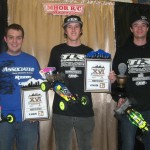 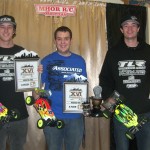 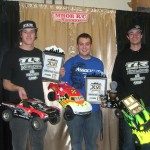